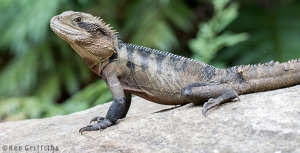 FrogID is a project to help identify and survey frogs in your area. This is done via an app on your phone whereby you can record the frog call, note your location and this information is sent off and collated. This is run through the Australian Museum.

Dragons of Sydney is run by the National Parks Association of NSW in conjunction with Macquarie University. The focus of this project is to investigate why Eastern Water Dragons are able to thrive in urban environments despite their proximity to humans. Water dragons have become so common in South Turramurra that Ralph Pridmore has applied to the Geographical Names Board to rename his local creek as Water Dragon Creek.
Published in STEP Matters 195
Read more...
Sunday, 15 April 2018 15:06 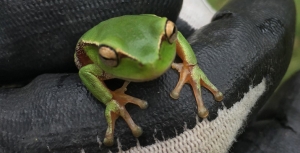 We gardeners are often urged to ‘buy native’, especially nectar-producing flowering shrubs like grevilleas and banksias – they attract birds of course, even if these days mostly noisy miners and lorikeets. But a native species that's not for every garden but carries hidden gems is the Swamp Lily Crinum pedunculatum.

This is not a true lily but a member of family Amaryllidaceae, like Agapanthus and Clivea. It can be found in the wild, fringing coastal lagoons, and if you came on the Wyrrabalong walk you may have seen them scattered along the shoreline of Tuggerah Lake. They're also common at Maitland Bay in damp ground protected behind the beach dunes.

They are a large lily-like plant with a sheath of very long, broad, spear-shaped, scooped leaves around a solid, fleshy base. We've had one in the garden for about 20 years and you'd need a bobcat and a couple of big guys to transplant it. Ours usually puts up three spikes of large, faintly perfumed, purple-streaked, creamy white flowers in summer.

The scooped leaves collect pools of water at their bases that last for several days after rain and tree frogs seem to have no difficulty finding them. Two days out of three you can see one to three cute little Peron's Tree Frogs Litoria peronii snuggled into the soggy leaf pockets – we get them in all sizes and subtly varying buff-brown shades so a number of different individuals come and go; and also tiny, green Eastern Dwarf Tree Frogs Litoria fallax turn up on occasion.

Other inhabitants include crickets, huntsmen spiders and snails, and probably other creatures we don't see who come and go at night or when we're not looking. Another tree frog species, Litoria verreauxii, could also turn up, and I'm still tuning up my frog i.d. skills to pick the differences – colours can vary quite a bit. 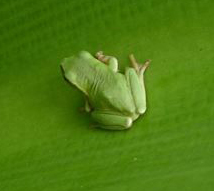 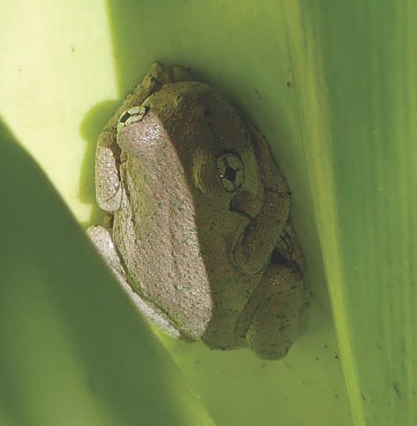 Even if you don't have any Swamp Lilies in your garden you may still have suitable plants. A friend finds them in her bromeliads, though I don't know which sort. Gymea Lilies are a possibility too, as are other amaryllids – in fact almost any lily or sheath-like plant that retains water after rain is worth checking. And I imagine having more unusual natives like swamp lilies helps the survival of such moisture loving creatures through our long dry spells.

PS   Swamp Lilies, like other amaryllids, are very prone to attack by Spodoptera caterpillars. Swarming with their longitudinal stripes they can eat a plant right down to the ground in a couple of weeks. It will recover via its rootstock but it doesn't look great in the meantime.

Despite the dry weather there have been other frog encounters – the banner photo at the top of the page is a Green Stream Frog (Litoria phyllochroa) found on the Darri Track by Helen Logie.