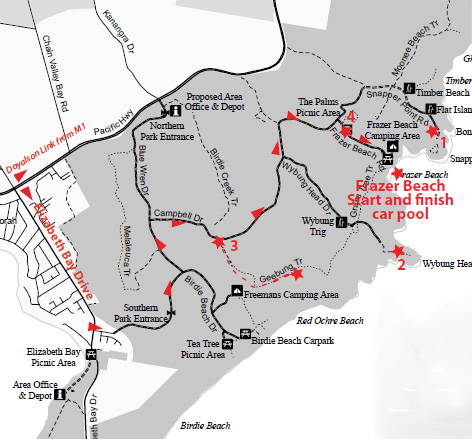 To complement Anita Andrew's talk on Permian Triassic Mass Extinction, this walk features the geology that encapsulates the end-Permian great extinction event at 252 million years, also known as the Great Dying. This wiped out 96% of all marine species and 70% of terrestrial mammals plus the majority of insect families. There are myriads of sites devoted to it but Wikipedia's a good start.

This is a series of short walks on headlands, clifftops and through littoral rainforest. It isn't a continuous coast track so we'll meet at Frazer Beach park, car pool, and drive then to headlands and trackheads starting with Snapper Point (1 on map) followed by Wybung Head (2) to view superb coastal scenery and the relevant geology. We'll then do a 2 km walk (3) through heathland, woodland and swamp forest followed by a short loop through littoral rainforest (4). Finally we'll relax at beautiful Frazer Beach, have a snack and maybe swim depending on weather.

The Vales Point coal (see the dark band in the photo below) is overlain by thin fossil soil and claystone breccia, then the white sandstone band was deposited as the 252 million year old end Permian extinction event began its major pulse; after that there was no more coal laid down in the Sydney Basin. 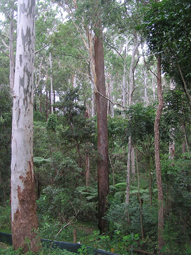 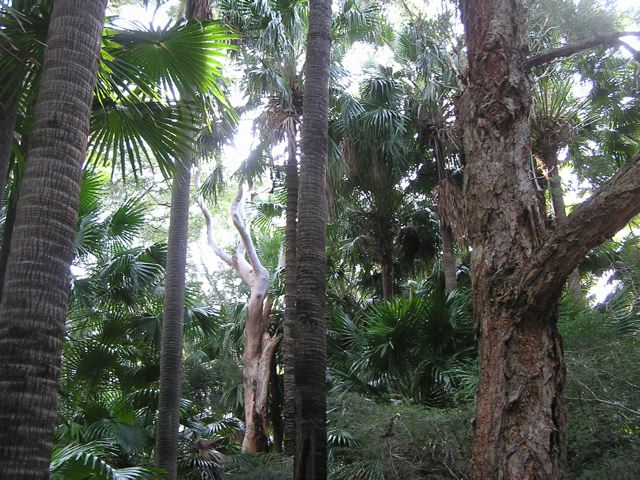 Littoral rainforest at The Palms

Sweeping view to Bird Island and Birdie Beach, with Lake Munmorah on the far right