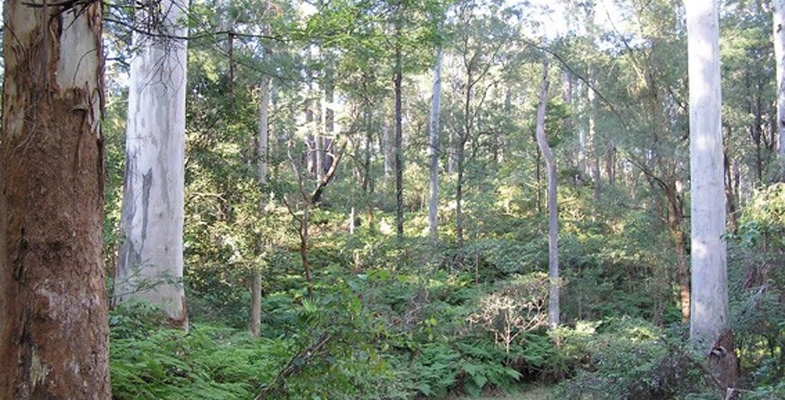 On the high ridges north of Sydney Harbour grew a tall, open forest of blue gums, blackbutts and casuarinas with a moist understorey of shrubs, ferns, creepers and orchids. The largest remnant to survive the timber industry, orchards and spread of suburbs remains at St Ives. Threats of fragmentation necessitate repeated community campaigns to avoid further loss.

In 1925 this remnant of tall forest was purchased as a demonstration forest and named after the commissioner for forests, Dalrymple Hay. 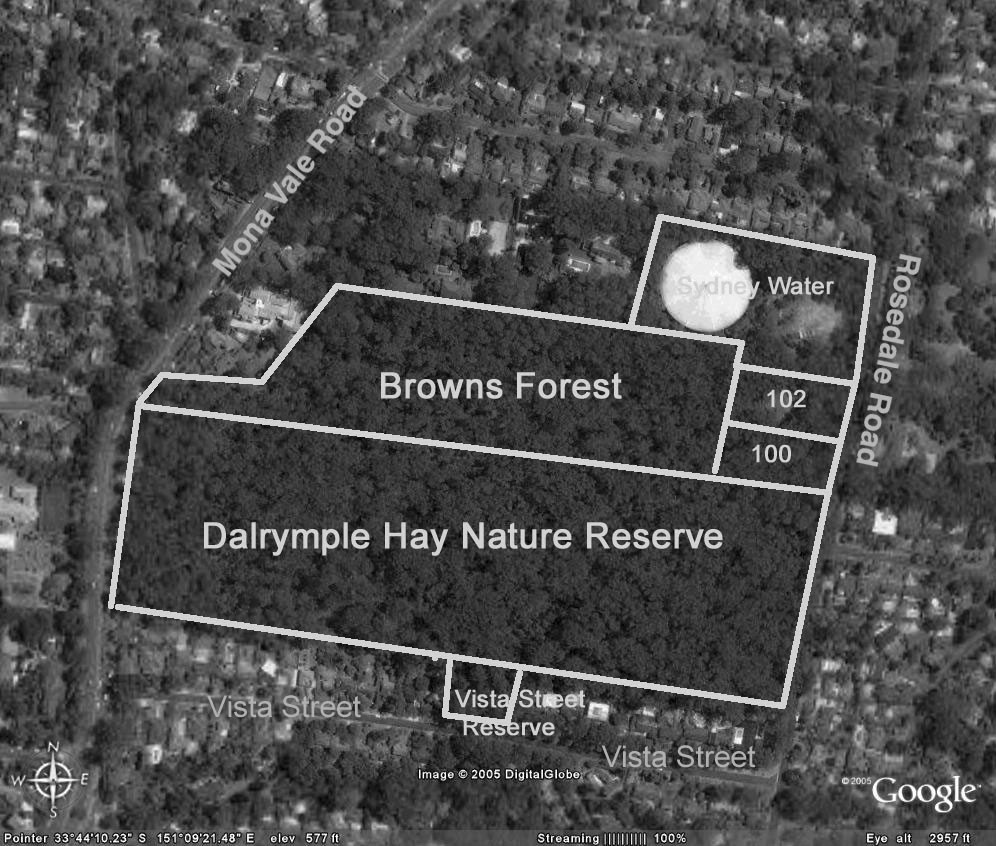 Browns Forest which then extended to surrounding roads, was reduced by subdivision into 1 acre blocks for housing when neither the NSW government nor Ku-ring-gai Council purchased it. What remains was saved by community pressure led by Annie Wyatt of the Ku-ring-gai Tree Lovers’ League, the mayor Cresswell O’Reilly and the Forest Preservation Committee. The 11 acres without a street frontage was purchased in 1934 by council for 1460 pounds, less 310 pounds from the owners if an undertaking was given to dedicate the land as forest reserve. Council completed the purchase with 350 pounds from public donations and covenanted Browns Forest as ‘forest reserve for all time’.

In 1946 land was resumed for water storage although the reservoir was not built until 1974.

100 and 102 Rosedale Road were owned by Prof Room from 1938. He built a house on the uphill part of 102 leaving the remaining portion forested. Following the deaths of Prof Room and his wife the property was sold in 1990 and the new owners submitted to council a nine lot subdivision on the 1 hectare.

Ku-ring-gai Bushland and Environmental Society, the National Trust and the NSW National Parks and Wildlife Service submitted objections, saying, due to the condition of the forest that the land must be purchased for conservation. Council rejected the subdivision but did not have the funds to purchase the land.

In 1997 Blue Gum High Forest was gazetted as an endangered ecological community in Schedule 1 of the NSW Threatened Species Conservation Act 1995.

In 2000 the 1 hectare was sold again and in 2002 a 12 lot subdivision was submitted to council, which was again refused. The owners appealed against council’s decision to the Land and Environment Court. The appeal was dismissed:

… because of its inability to provide a sufficient asset protection zone … and also its impact on the endangered Blue Gum High Forest ecological community.

Strong community support was now building for conservation of all of the Blue Gum High Forest at St Ives. A coalition of community organisations, led by STEP Inc, formed the Blue Gum High Forest Group which led walks through the forest, distributed leaflets, gave talks, wrote begging letters seeking donations and lobbied council. Fortunately most councillors were by then wanting to save this 1 hectare of forest but the purchase price was over $2million.

The properties, 100 and 102 Rosedale Road, were advertised by Colliers International for sale on the international market. However, by the closing date at the end of May they had not been sold.

The Commonwealth Minister for Environment and Heritage announced the listing of the Blue Gum High Forest ecological community as critically endangered. NSW also upgraded the listing.

Half of the 1 hectare was purchased by NSW Rail Infrastructure to offset loss of BGHF due to railway upgrades near Hornsby.

Council agreed to apply for funds from the National Reserve System and this was supported by the Federal Member for Bradfield.

The BGHF Group had raised donations of $72,000 which impressed the councillors.

Yet again, in 2007, another development application was submitted for a house on 102 Rosedale Road and again council rejected it on the grounds of impact on the ‘critically endangered’ Blue Gum High Forest ecological community. Fortunately the Commonwealth contributed $350,000 to assist council’s purchase of this last half hectare of Blue Gum High Forest at St Ives. The whole was added to the National Reserve System which includes protected areas across Australia including national parks, nature reserves, historic sites and private land under voluntary conservation agreements.

It was time for a party. Yet another exhausting battle to prevent loss of another piece of our natural heritage from being destroyed had been won. Community care for the Blue Gum High Forest continues with bushcare groups working with National Parks and Wildlife Service and Ku-ring-gai Council. To join in contact Ku-ring-gai Council.