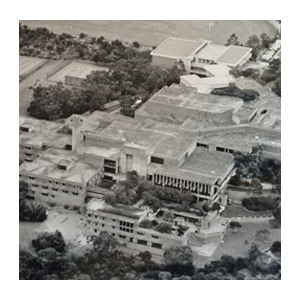 History of the UTS Site

The land was privately owned until 1915 when the Commonwealth Government acquired it during the First World War for the army’s use as a rifle range.

It was acquired by NSW in 1961 'for and on behalf of Her Most Gracious Majesty Queen Elizabeth II for the purposes of the Public Instruction Act of 1880'.

The site was developed as William Balmain Teachers College and opened in 1971. Construction had been delayed by protests by local residents about destruction of bushland on the site and later, with the backing of Ku-ring-gai Council, by protests about the problems of traffic in the narrow streets. The architect, David Turner, stated that his main design aim was to keep the college as compact as possible, because the landscape was so wonderful it should not have been built on. When it was going ahead anyway, I thought I’d protect the environment all I could'.

In 1974, along with the other teachers colleges, William Balmain Teachers College officially closed. It then became Ku-ring-gai College of Advanced Education, a corporate body with its own council. It was no longer tied to the Education Department. However it did not own the campus land which remained vested in the Crown.

... the site continues to be used for the same academic purposes.

In 1990, UTS lodged a development application with council for construction of an access road from Lady Game Drive through the environmentally sensitive College Creek area. A committee was formed and STEP's representative, who has a civil engineering background, proposed an alternative route through a less sensitive area. Over the years UTS submitted several revised development applications, as a result of very protracted negotiations, community meetings and submissions involving UTS, Ku-ring-gai Council, the National Parks and Wildlife Service, environmental groups and residents. Eventually in 1998 Ku-ring-gai Council granted conditional development consent, demanding that UTS produced a much needed Bushland Management Plan for the grounds. However this never occurred and the development consent expired.

Unfortunately, the planning and review process for the rail link concluded that a station at UTS was not economically viable. UTS had prepared a forecast of an increase to 6600 students by 2006, however economic consultants for the Department of Urban Affairs and Planning indicated even an increase to 11,500 students would not make the construction financially viable.

The UTS site is also located at the tip of a peninsula, with only one access point through surrounding residential streets, in a bush fire prone area. Some of the environmental planning issues associated with expansion of the campus on this site are able to be resolved, however the major concern of traffic and transport impacts on the adjacent area still needs to be addressed. The strong concerns and opposition of local councils and local residents over any proposed campus expansion is also a critical issue that needs to be noted.

Dilapidation of the Campus

After abandonment of the access road and railway station proposals, UTS stated that the campus was suffering because staff and students no longer wanted to go there. In June 2005, Fay Pettit was able to write:

There have been a great many indications that for some time the Ku-ring-gai campus is being deliberately run down and its education function undermined.

Fay went on to give nine examples including the exclusion of the campus from UTS annual reports, the withdrawal of lecturers, the closing down of the popular evening courses and the neglect of maintenance. The campus is now in a sad state of dilapidation: a state that one may conclude arose from the university wanting it that way.

Part 3A of the Environmental Planning and Assessment Act

In late 2005, the NSW Government amended the Environmental Planning and Assessment Act (1979) with the addition of Part 3A. The Environmental Defender's Office NSW published a paper which stated:

In effect, Part 3A of the Act dramatically reduces the involvement of the community in the original decision-making process and seeks to reduce any risk of concerned individuals or groups delaying or preventing significant development by limiting the grounds on which, or the circumstances in which, they can seek merits or judicial review. Instead, the Minister for Planning and the Director General, Department of Planning, maintain the power to make all key decisions regarding significant development, with advice from 'expert panels', limited input from other key agencies and little opportunity for effective criticism where the bureaucracy 'gets it wrong'.

In March 2007, CRI wrote to Frank Sartor, the Minister for Planning, requesting that he call in the UTS redevelopment and rezoning application using his powers under Part 3A.

STEP viewed this request as a tacit admission that the local community and Ku-ring-gai Council had rejected the proposal and thus these voices need to be sidelined.