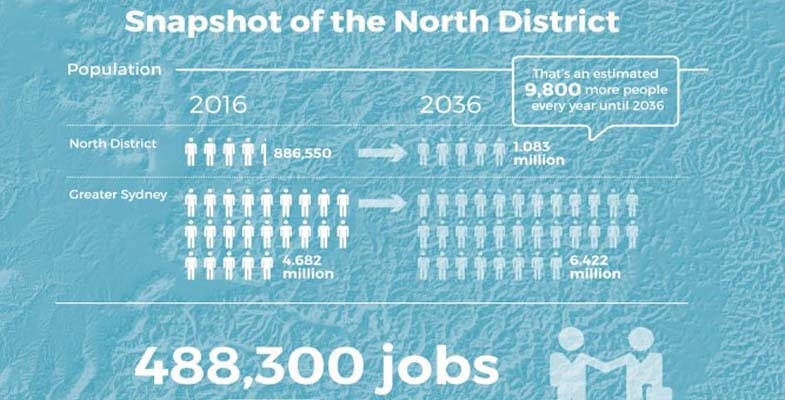 Have your say on the North District Plan and the Greater Sydney Strategy by 31 March 2017.

District Plans cover the plan for growing Greater Sydney in detail. Sydney is divided into six districts and ours is the North District.

Increase in Number of Dwellings

The table below summarises the implied new dwelling requirements from the population growth rates adopted in the Greater Sydney Strategy.

Here is an example of how the increase in dwelling numbers could come from replacement of existing houses with higher density dwellings. If the average replacement ratio is three new dwellings for one original dwelling in Lane Cove, around 4000 existing homes (around 30% of the suburb) would be replaced by 12,000 new terraces/townhouses over 25 years.

The sheer scale of new housing and infrastructure that will be needed to accommodate the increase in population over the period 2016–36 means that the character of northern Sydney will change. That will not be the end of it. The growth is not expected to stop once 2036 is reached!

The financing for this development could create pressure for sale of public land. Alternatively it could be financed by concessions in the height and location of high-rise. Dwellings near open space (including bushland) are more valuable and provide greater capacity for ‘value capture’. We see this approach in the proposals for development in South Dural where the developer is applying for approval of six storey buildings adjoining a riparian zone.

STEP’s main area of interest is the likely impacts of extensive further development on our existing bushland and native vegetation and what the District Plans have to say about the future development and management of these areas. We are also concerned about the environment of Sydney in general with issues like:

The North District Plan is a frustrating document. It makes encouraging statements but then provides little detail on how the intentions will be actioned.

It emphasises the rich natural environment of the North District located in national parks and reserves, public and private land (p131).

It states that more effective outcomes can be delivered through planning at a strategic level that:

… can consider opportunities to connect areas of biodiversity, the relationship between different areas and threats to natural features.

Does this mean considering cumulative impacts and wildlife corridors?

The future status of natural areas is unclear. Natural areas that are currently cared for under council plans of management need to continue to have protection as a special category of public land use. The Department of Planning has been reviewing the State Environment Planning Policy 19 that defines protection of urban bushland for well over a year. We should have this information by now so we know how it fits in with the District Plans. We understand that Tree Preservation Orders are included in this review.

The whole process is a quantum change from the past where a regulatory planning system, such as SEPPs protected our natural areas. We now have a strategic planning system which facilitates further development intensity and the strength of the regulatory protection is unclear.

The future conflicts are exemplified by the stated objectives of strategic conservation planning (p132), for example:

Some examples of specific issues that need to be addressed in the North District include:

The development of the Green Grid through the Metropolitan Greenspace Program is lauded by the District Plan as an important part of promoting a healthy environment. Broadly the Sydney Green Grid program is all about improving recreational spaces and their accessibility, including access to national parks. STEP is very concerned if it includes developments like bike trails through uncleared bushland, or exploitation for tourism such as leasing public land within national parks for hotels and camping areas.

The North District Plan refers to a detailed report that outlines the conceptual approach behind the Green Grid that is on the website. On enquiry we discovered that it has still not been released. Lack of key information including the changes to SEPP 19 is unacceptable and undermines the purpose of public consultation of the North District Plans.

The Greenspace program is funded by regular grants. $3 million was provided in 2015–16 and $4 million in 2016–17. $50,000 is going towards improving bush tracks in Hornsby. There is no long-term commitment to fund the program.

The North District Plan identifies some priority projects (p137). The proposal for Lane Cove River area is a concern. The description is:

Will this involve clearing national park land? Currently this area of the river provides highly diverse habitat areas for native animals. On a recent STEP walk 50 native bird species were recorded. Mountain bike trails have so far been excluded from the LCNP. The area needs protection from high recreational use.

We have an opportunity now to tell the Greater Sydney Commission what is needed to ensure that Sydney’s unique environment is not destroyed by population growth.