Look Up! A Powerful Owl Could be Sleeping in Your Backyard After a Night Surveying Kilometres of Territory 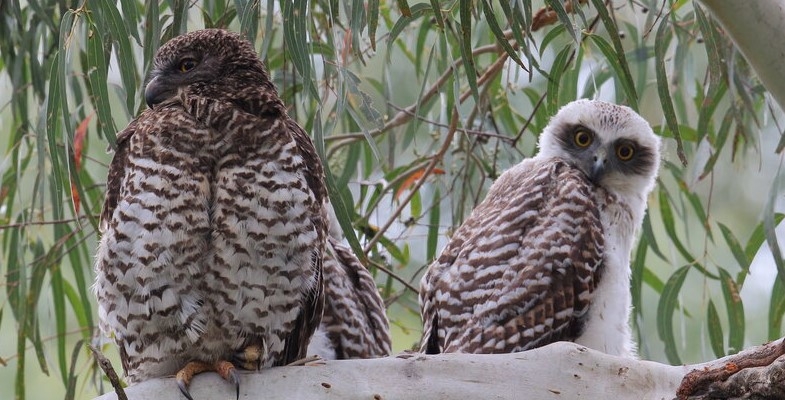 Picture this: you’re in your backyard gardening when you get that strange, ominous feeling of being watched. You find a grey oval-shaped ball about the size of a thumb, filled with bones and fur — a pellet, or ‘owl vomit’.

You look up and see the bright ‘surprised’ eyes of a powerful owl staring back at you, with half a possum in its talons.

This may be becoming a familiar story for many Australians. We strapped tracking devices to 20 powerful owls in Melbourne for our new research, and learned these apex predators are increasingly choosing to sleep in urban areas, from backyard trees to city parks.

These respite areas are critical for species to survive in challenging urban environments because, just like for humans, rest is an essential behaviour to conserve energy for the day (or night) ahead.

Our research highlights the importance of trees on both public and private land for wild animals. Without an understanding of where urban wildlife rests, we risk damaging these urban habitats with encroaching development.

Powerful owls are Australia’s largest, measuring 65 centimetres from head to tail and weighing a hefty 1.6 kilograms. They’re found in Australia’s eastern states, except for Tasmania.

These owls have traditionally been thought to live only in large old-growth forested areas. However, Victoria has lost over 65% of forest cover since European settlement, and because of this habitat loss, the owls are listed as threatened in Victoria.

Their remaining habitat is extremely fragmented. This means we’re finding owls in interesting places — from dry, open woodland to our major east coast cities. This is likely due to the high numbers of prey, such as possums, that thrive alongside exotic garden trees and house roofs.

Powerful owls usually eat one possum per night, or 250 to 300 possums per year — mostly common ringtail and brushtail possums in Melbourne. They’re often seen holding prey at their roosting spots, where they’ll finish eating in the evening for breakfast.

This has ecosystem-wide benefits, as powerful owls can help keep overabundant possums in check. Too many possums can strip away vegetation, causing it to die back, which stops other wildlife from nesting or finding shelter.

But powerful owls are extremely elusive. With low populations, locating owls and researching their requirements is very difficult.

So, to help narrow down the general areas where powerful owls live in Melbourne, we used species distribution models and sought help from land management agencies and citizen scientists.

Over five years, we deployed GPS devices on 20 Melburnian owls to find how they use urban environments. These devices automatically record where the owls move at night and rest during the day.

We learned they fly, on average, 4.4 km per night through golf courses, farms, reserves and backyards looking for dinner and defending their territory. One owl along the Mornington Peninsula travelled 47 km over two nights (possibly in search of a mate). Another urban owl called several golf courses in the Melbourne suburb of Alphington home.

Choosing where to sleep

After their nightly adventures, the owls usually return to a number of regular roosting (resting) spots, sometimes on the exact same branch. The powerful owl chooses roosts that protect them against being mobbed by aggressive daytime birds, such as the noisy miner and pied currawong.

We found the owls used 32 different tree species to roost in: 23 were native, and nine were exotic, including pine and willow trees. This shows powerful owls can adapt to use a range of species to fit their roosting requirements, such as thick foliage to hide in during the day.

Owls will generally roost in damp, dark areas during summer, and in open roosts in full or dappled sunlight during winter to help regulate their body temperature.

Our research also shows rivers in urban environments are just as important as trees for roosting habitat.

Rivers are naturally home to a diverse range of wildlife. Using trees near rivers to rest in may be a strategic decision to reduce time and energy when travelling at night to find other resources, such as prey, mates and nests.

Rivers that constantly flow, such as the Yarra River, are a particular favourite for the owls. 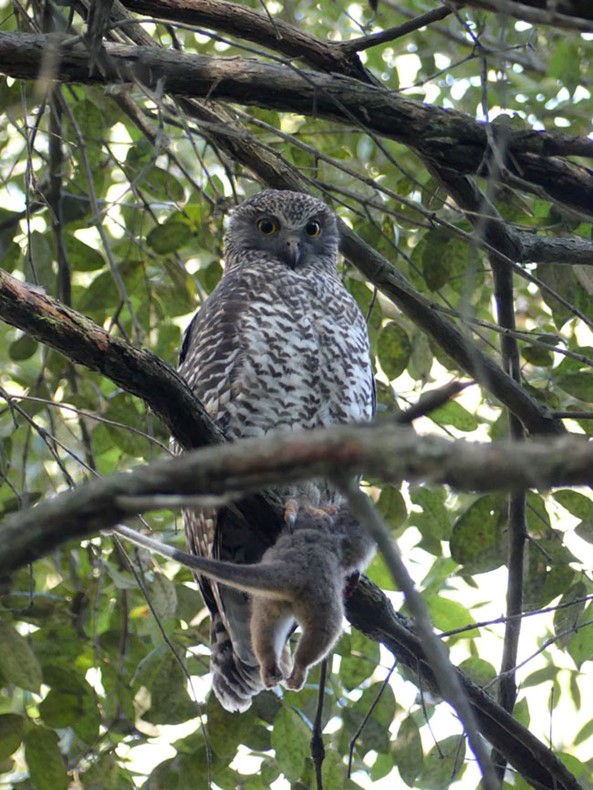 These resting habitats, however, are under constant pressure by urban expansion and agriculture. Suitable roosting habitat is either removed, or degraded in quality and converted to housing, roads, grass cover or bare soil.

We found potentially suitable roosting habitat in Melbourne is extremely fragmented, covering just 10% of the landscape because owls are very selective about where they sleep.

Although there might be the odd suitable patch (or tree) to roost in urban environments, what’s often lacking is natural connectivity between patches. While owls are nocturnal, they still need places to rest in the night before they settle down in another spot to sleep for the day.

Supplementing habitat with more trees on private property and enhancing the quality of habitat along river systems may encourage owls to roost in other areas of Melbourne.

Powerful owls don’t discriminate between private land and reserves for roosting. So, conserving and enhancing resting habitats on public and private land will enable urban wildlife to persist alongside expanding and intensifying urbanisation.

So, what can you do to help?

If you want powerful owls to roost in your backyard, visit your local indigenous nursery and ask about trees local to your area.

Several favourite roost trees in Melbourne include many Eucalyptus species and wattles. If you don’t have the space for a large tree, they will also roost in the shorter, dense Kunzea and swamp paperbark (Melaleuca ericifolia).

Planting them will provide additional habitat and, if you are lucky, your neighbourhood owls may even decide to settle in for the day and have a snooze.

This article was published in The Conversation on 1 March 2021. It was written by Nick Bradsworth, John White and Raylene Cook from Deakin University