Glyphosate Confirmed as Safe to Use but not Everyone Agrees 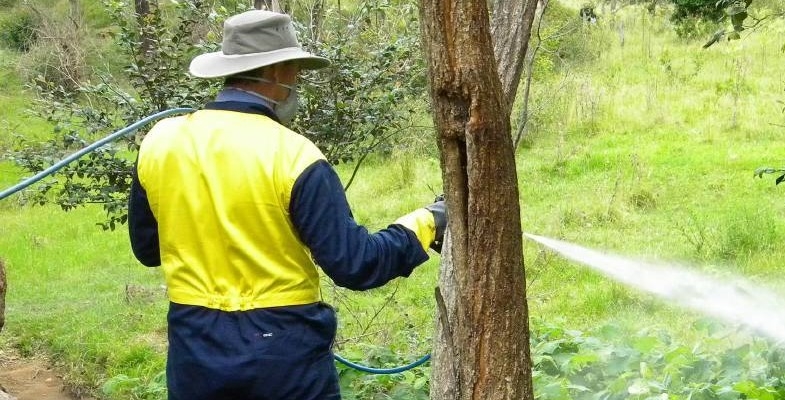 Glyphosate, most commonly marketed as Roundup, is extensively used as a herbicide in agricultural areas and bushcarers know how effective it is in controlling weed invasions in native vegetation woody weeds such as privet and ground covers such as Ehrharta. In recent years its safety has been called into question.

Glyphosate was developed by Monsanto and came onto the market in the 1970s. In 2015 the International Agency for Research on Cancer (IARC) determined that glyphosate may be capable of causing cancer, but did not specify the circumstances, since that was beyond the IARC remit.

This decision led to three court cases in the US where huge damages were awarded to people who developed non-Hodgkins lymphoma. In each case they found that Monsanto had not provided adequate information about the risks of using glyphosate-based products. The people involved had repeatedly come into direct contact with the chemical and were not aware of the need to take the precautions.

The response to these events has been a ban of its use in some countries and in some council areas in Australia. This is despite the announcement by the European Food Safety Authority that glyphosate ‘is unlikely to pose a carcinogenic hazard to humans’. Similar conclusions have been reached by regulatory authorities in Australia, the US, Canada, Japan and New Zealand.

How does it work?

Glyphosate is absorbed through foliage and transported to growing leaves. It interferes with the shikimate pathway used to produce some amino acids. Animals and people lack this pathway so they are not harmed by the presence of the chemical in the food they eat.

Earlier this year at the AGM of the Australian Association of Bush Regenerators, Tim Low gave a talk on glyphosate. Tim is author of the best-selling book Feral Future, he helped found the Invasive Species Council and recently wrote an assessment for them called Glyphosate: A Chemical to Understand. The following information gives a brief summary of this very detailed paper.

Tim explained that the danger posed by a chemical can be assessed in two ways:

The IARC determined that glyphosate may cause cancer but so does exposure to the sun, eating salami or drinking wine. The risk is determined by the circumstances and level of exposure.

The Australian Pesticides and Veterinary Medicines Authority is an independent statutory authority that is responsible for testing the safety of pesticides. They commissioned a report from the Office of Chemical Safety. This review led the Australian Pesticides and Veterinary Medicines Authority to restate a previous finding that glyphosate is safe to use if the safety instructions are followed. The safety instructions include advice to wear the likes of ‘safety shoes, overalls, gloves, safety glasses’ when using concentrates and ‘wear gloves and wash hands after use’ for home garden mixes.

The opinions expressed by other experts quoted in the paper vary and are often qualified by the context of frequency of use and observation of exposure precautions. Some still say it should be avoided.

Are there any effective alternatives?

A pesticide expert at the University of Sydney, Professor Ivan Kennedy, says that ‘any’ replacement is likely to be more damaging to human health, and a herbicide expert at the University of Adelaide, Dr Chris Preston, says that glyphosate is safer than the alternatives, and better for the environment because there is no residual toxicity. This long persistence in the environment can impact on waterways, seagrass and algae.

In some cases, new chemicals appear to be better because there is less research on their impacts. Glyphosate has been studied far more intensively than the current alternatives. For example, Atrazine has caused tumours in female rats but the significance for humans is unknown because, the IARC decided, too little is known about atrazine to assess its carcinogenicity.

Most of those who argue against glyphosate do not acknowledge the chemical world we live in. One Guardian article noted that glyphosate ‘traces are commonly found in our food and even our bodily fluids’ but this is the case with many other chemicals.

Byron Shire Council moved to ban glyphosate in 2013 when councillors passed a resolution aspiring to end pesticide use in highly frequented public places. Council officers tried slashing and brush cutting instead but roadside weeds increased in diversity and spread, and potholes formed where weeds undermined the road. Current policy is to use herbicides to control priority weeds on roadsides, and strive to replace weedy roadside grasses with low-growing desirable plants.

Byron Council has largely eliminated herbicide use in urban areas. The council purchased a steam weeder but it will only kill annual weeds, so is unsuitable for most environmental weeds. Steam has to be used carefully because of the risk of burns, and only suits areas with vehicle access.

Hobart City Council trialled steam with disappointing results. Many weeds needed repeated treatments. It was estimated that the city-wide use of steam would cost more than ten times more than the use of glyphosate.

In Perth one council trialled alternative methods on clovers and other small weeds growing beside a gravel trail, achieving some success with mulch, steam, pelargonic acid, pine oil, and salt and vinegar. There was no suggestion that these methods will work against larger weeds. Trials are ongoing.

Weed control becomes as much more labour-intensive process if herbicides are not used. Non-chemical methods of control, especially steam spraying, can be used against some very small weeds in city parks and ovals. They do not kill larger weeds in parks, nature reserves and on farms.

Current opinions of the use of glyphosate

The National Farmers’ Federation has said farming cannot survive without glyphosate, presumably because of poorer weed control from other herbicides (and lower yields under organic farming). The president, Fiona Simson, also pointed out the environmental benefits of glyphosate. Farmers can spray the weeds that emerge in bare fields rather than killing them by tilling, which disturbs soil structure and soil biota, increases soil erosion and loses moisture. Defending glyphosate, Simson said:

New practices like low- and no-till cropping have radically reduced our greenhouse gas emissions, improved the quality of our soils, and taken water use efficiency to new heights.

Glyphosate is the main herbicide used against bushland weeds, and a ban would undermine environmental goals. After the American court cases the president of the Australian Association of Bush Regenerators, Dr Tein McDonald, said that bush regenerators:

… do not want to discard a highly important tool from our conservation toolbox without sound justification.

Adam Muyt in his book Bush Invaders of South-eastern Australia (2001), states that, of the many methods to control weeds in bushland reserves (which include fire, mulching, slashing, grazing and scalping), herbicides:

… offer the only really effective treatment for removing many of the more tenacious and aggressive invasive species.

Unlike on farms, glyphosate is usually applied in a discrete and targeted way, with stem injection or a cut-and-paint application to individual plants. Admittedly, on large scale weed invasions, it is sprayed on foliage and some spray drift can then occur. Methods like cut and paint avoid the need to disturb the ground to dig up weeds, creating bare ground that invites further weed germination and can cause erosion.

On a larger scale glyphosate is often the most effective means of controlling weeds of national significance such as gamba grass in the Northern Territory. This grass was imported as cattle feed but areas that are not eaten create hotter fires. Around Darwin fire-fighting costs have increased significantly.