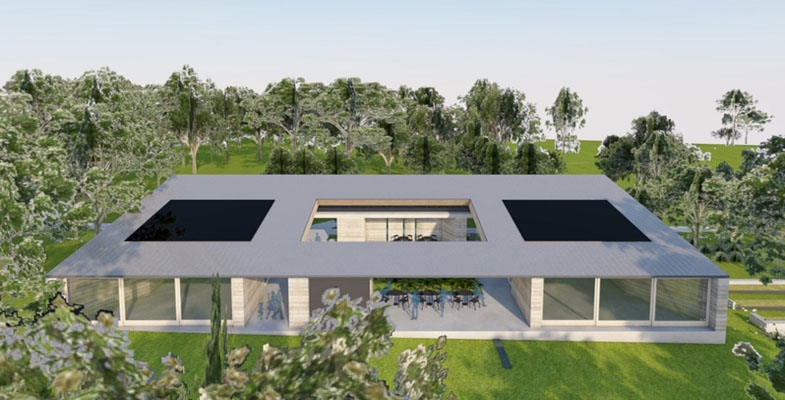 The St Ives Showground and Precinct Lands are a complex mix of developed areas with a long history within a bushland setting including a large area of Duffys Forest endangered ecological community. The Showground itself has been used for agricultural shows since 1927 and as an equestrian showground for almost as long.

During the Second World War it was occupied by the Defence Forces. It contains several heritage buildings and footings for former facilities such as a mess hut and headquarters. Of particular interest is the unique relief map of Ku-ring-gai Chase constructed by army engineers. It would have taken considerable skill to accurately represent the landforms of this rugged bushland area.

The Precinct Lands include the Wildflower Garden and Community Nursery that retain some of the legacy from original uses of market gardening and poultry and pig farming such as dams. The old Green Waste site and the HART Road Safety Centre are part of the precinct but council is not currently Crown Land Manager.

Development and management of various parts of the Showground and precincts have been subject to consultation on options for use and development several times dating back to 1999. Back in 2014 there was a proposal to build a large sports complex on the Council Nursery site with two synthetic fields and an indoor sports centre. This was finally abandoned for cost and environmental reasons.

The management of the area has been complicated because of multiple ownership. Since the Crown Lands Management Act was passed in 2016 many of these issues have been clarified. Ku-ring-gai Council has now been given authority to manage all of the Showground, Nursery and Wildflower Garden sites.

Councils were required to finalise a Plan of Management (PoM) for the Crown Land they manage by 1 July 2021. Ku-ring-gai had received approval earlier in 2021 for the basic aspects of the plan relating to land categorisation. It seems there is some leeway being given to submission of final PoMs as there are a large number of councils with PoMs needing approval. The finalisation process has to comply with the Crown Land Management Act and the Local Government Act 1993.

The draft PoM was placed on exhibition with submissions invited to be made with a closing date of 6 August. The last issue of STEP Matters gave a brief outline of the multiple aspects of the plan that the community could comment on, e.g. whether they support or oppose a proposal, have different ideas for an activity, some of the wording of management actions is unclear or the priority is inappropriate.

Many community groups ranging from users of the precinct to environment groups concerned about some proposals and their impact on the area’s bushland put in submissions prior to the deadline. Some groups put in a lot of time working on ideas for improving the facilities and the functioning of the precinct.

But what happened next shocked us and many other groups. Our submissions were made before the deadline of 5 pm, 6 August but the papers for the council meeting that was to consider the draft PoM were published before the closing date. The report had obviously been written by council staff some days before. All the submissions from the community groups, 15 in total, were not considered in the report.

STEP and other groups protested about this treatment. There were no apologies and a curt response that the actions were taken for ‘operational reasons’ that the finalisation of the PoM was urgent. Council needed to get moving with designing the Cultural Environmental and Education Centre before the local government election. The September meeting was not a possibility because the mayoral election was to occur at the meeting. The council PoM had to be submitted to the Minister for Crown Lands for approval as soon as possible for some reason that was not explained apart from the excuse that the minister had lots of plans to approve and the minister had been told to expect this plan in August.

The staff recommendation at the council meeting was for the PoM to be approved subject to the Director, Strategy and Sustainability making a few amendments to the draft clarifying some wording inconsistencies and correcting some names. So that was that!

Some submissions pointed out that council had still not implemented resolutions passed back in 2009 accepting recommendations in Philips Marler heritage report that applications be made for state heritage listing of items associated with the agricultural show history and wartime buildings at the Showground and Caleys Pavilion at the Wildflower Garden. This building is a rare example of a small building in the style of the Sydney School of Architecture from the 1950s to 1970s.

At the last minute the councillors agreed to amendments to the PoM to give priority to pursuing heritage listing and preparation of a Conservation Management Plan.

In further investigation of actions of council staff STEP and Friends of Ku-ring-gai Environment looked into the history of planning actions in relation to the Showground. It seems we were meant to be following the council meetings and know all about some earlier decisions.

The Cultural Environmental and Education Centre had already been designed and costed to go ahead. The location was decided back in May 2019. In June 2021 council resolved to progress to a detailed design. Only internal consultations and a presentation to councillors had been undertaken prior to this June meeting. The only information in the draft PoM was an indication of where the building was to be placed on the site. We were totally in the dark about the design concepts and purposes of the centre.

And yet at the same August meeting council resolved to give the general manager authority to negotiate the finalisation of a quotation for a detailed design for the Cultural Environmental and Education Centre (photo above). At that stage of the meeting the approved PoM that was supposed to be a prerequisite for proceeding with the Cultural Environmental and Education Centre had not been considered by the meeting.

Another development was announced early in September, the Tree Tops High Ropes Course. The site was indicated in the draft PoM but that is about all we know. Has there been an environmental assessment for the site that is mapped as Duffys Forest endangered ecological community?

Public consultation has been a sham.

The hurried process of consultation has left interested community groups feeling as if senior council staff have their own agenda that will be pushed through and community views can be ignored. However once we knew more of the background story it seems the main issue is poor communication. Staff were being asked to prepare a complex document in a shortened timeframe and details were left out of previous decisions.

Earlier consultation and information sessions for the community should have been undertaken. The draft PoM document stated that consultation had taken place but it seems this involved just a few paying users of the facilities. There will be several plans to be written in the future such as the Conservation and Biodiversity Management Plans and detailed masterplans. The draft PoM listed several possibilities of future facilities and developments that will be covered by specific plans. We would like to see plans for the community nursery site announced soon as some buildings are deteriorating fast.

We hope the consultation on these plans is carried out in a constructive manner. We are still not sure about the legitimacy of the approval of the Cultural Environmental and Education Centre and high ropes course under the Crown Lands Management Act 2016.