Eucalypt of the year 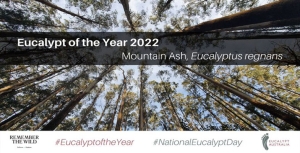 Eucalypt Australia holds a competition every year asking people to vote for their favourite out of a short list of selected species. And this year the winner is … the Mountain Ash, E. regnans, the tallest flowering plant in the world.

It grows as tall open forests in high rainfall areas of southern Victoria and north-eastern and southern Tasmania. These Mountain Ash forests are important homes to threatened species like the Leadbeaters (Fairy) Possum and Greater Glider.

The tallest regnans lives in Tasmania’s Huon Valley. Named Centurion, it towers at 100.5 m high. Another notable tree, named Gandalf’s Staff, could be 500 years old and is found in the Styx Valley.

E. regnans is one of an estimated 80 species of eucalypt that are killed by fire, and can only regenerate from seed. They take at least 20 years to mature and produce seed. The increasing fire frequency and severity is threatening their survival.

Second place went to the splendid and widely beloved Red Flowering Gum, Corymbia ficifolia. Its restricted endemic range is in southwestern WA but it now commonplace along streets and in gardens across southern Australia in a hybridised form.

Rounding out the top three is the statuesque Sydney Red Gum, Angophora costata. Also known as the Smooth-barked Apple, this species has been in the top three eucs almost every year since the competition started in 2018!

Eucalypt Australia is the operating name of a Trust, established in 2007 following a bequest from Bjarne Klaus Dahl.

Norwegian-born Bjarne Klaus Dahl spent his working life among the eucalypt forests of Victoria. He developed an affinity with the Australian bush and a high regard for the silvertop ash, E. sieberi.

Bjarne Dahl linked his well-being and financial prosperity to eucalypts, so much so that he left his entire estate to the Forests Commission of Victoria. The Trust’s objectives are the establishment, promotion, cultivation and conservation of eucalypts, and education of the public about them.