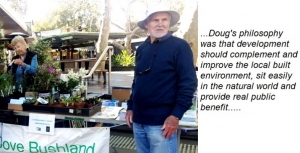 Members of the Lane Cove Bushland and Conservation Society and the Lane Cove community have been saddened by the death in September of Doug Stuart. Doug was a tireless advocate for the natural and built environment of Lane Cove and further afield. His first venture into bushland protection was prompted by news in 1970 that the local golf course wanted to double its size by annexing bushland, some of it at the bottom of his garden. Community anger at the potential harm to local flora and fauna prompted a public meeting and the foundation of the Lane Cove Bushland and Conservation Society in March 1971. Stuart was a founding executive member and, with his wife Norma, has been a driving force behind the society serving as president (10 years) and secretary (12 years).

In the summer of 1971 to 72, Stuart organised a large team of volunteers to survey the state of all Lane Cove’s bushland to identify sites suitable for regeneration. He drew maps of each site and collated ownership details. He gave the document to council who responded to the call to maintain and protect it. In 1998, he helped found RASAD, a community group advocating for appropriate development in the Lane Cove village. Doug’s profession as an architect enabled close analysis of development proposals.

His philosophy was that development should complement and improve the local built environment, sit easily in the natural world and provide real public benefit. RASAD spoke out against a series of inappropriate proposals, demanded change in others and refused to accept developers’ proposals that would have turned Lane Cove’s art deco village into concrete and steel.