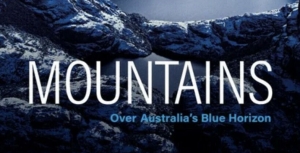 I can't quote a price for this book because it was a gift or rather a swap. I met the author socially at a publishing friend's lunch – he received a copy of Rocks and Trees in return though I possibly got the better half of the deal!

The author Alasdair McGregor has multiple credits to his name, he is an architect, artist, writer, photographer, expeditioner and historian of Australian explorers and pioneers.

This book, Mountains, was created on request by the National Library following highly regarded previous works like Frank Hurley: A Photographer's Life and Mawson's Huts: An Antarctic Expedition Journal.

I warmed to this book because of a personal preference for ranges like the Snowies and Blue Mountains over ‘real mountains’ like the Swiss Alps. He quotes Sir Edmund Hillary's well known comment that Tasmania's Federation Peak is ‘Australia's only mountain.’ Jagged and formidable though it is only 1,224 m high, hardly on a world scale in elevation. But that isn't really the issue in our continent where ranges like the Blue Mountains and the high peaks of North Queensland were formidable barriers to early settlers and explorers whether in terms of terrain, vegetation or in getting on with the locals.

The style of description in the various chapters is broad and framed in a historical sense because to learn what it was like to traverse Australian mountain country in early settler days is a vivid introduction, and in the case of the Snowies, to follow through their history that included early cattle grazing, Von Mueller's botanical visits, gold mining, early skiing pioneers and the Snowy Mountains scheme paints a vivid picture. Though this is embellished with the sad accounts of threats to wildlife like the Bogong Moth and mountain pygmy possum, to wildfires and to the plague of wild horses. But the Snowies is a classic illustration that on our so-called flat continent we have alpine vegetation above the tree line in one corner and tropical rainforest in others. And our fractious summers bring both tropical mangos and cool climate cherries in abundance.

Some of Australia's mountain country he describes in the book I know well, like the Hamersley Ranges through years of geological fieldwork. But the chapter I probably enjoyed most was on country I don't know; the chapter on the high mountain peaks of far north-east Queensland where cloud forests with native rhododendrons are unique on our continent but threatened by climate change. And where it rains like you wouldn't believe. He also has vivid personal stories to tell from his experiences on Heard Island where he was in the first party to climb the awesome peak of Big Ben. He still regards that island as his most beautiful place.