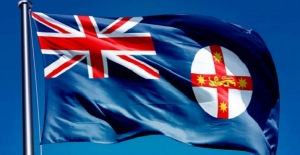 Since the re-election of the Berejiklian government there has been a mixed bag of news in relation to the environment. Here are some brief points.

We welcome the appointment of Hornsby MP Matt Kean as Minister for Energy and Environment. He has made promising statements emphasising the importance of national parks and the need for new action on climate change and threatened species. However his power over the short-sighted members of cabinet is uncertain.

Changes to the Office of Environment and Heritage

The abolition of the Office of Environment and Heritage makes it difficult to assess the level of funding for national parks under the budget relative to previous years. The ABC has reported that, in the latest budget, $80 million is being cut from NPWS.

In a statement to the ABC, the government said those cuts would come through more efficient work practices in the department. How can the department be made more efficient after the $121 million cut in the 2016–17 budget that lead to about 100 ranger positions being lost? We believe there is more restructuring of front-line staff to come.

The budget included $9 million to improve open space in Frenchs Forest with new green connections, walking tracks and bike paths linking the local community to nearby bushland corridors. This is a development to watch out for. Will there be more mountain bike tracks?

The Audit Office released its assessment of the administration of the land clearing laws in June. The media release included this statement:

The processes supporting the regulatory framework are weak and there is no evidence-based assurance that clearing of native vegetation is carried out in accordance with approvals.

Maps of vegetation that landowners need to operate under the new legislation are still not available.

It was announced recently that the government will not be pursuing prosecutions of landowners who have cleared land illegally under the Native Vegetation Act that applied prior to the Biodiversity Conservation Act in 2018. This new act provides for a lot more self-assessment so the past clearing may have been legal under the new law.

Data show massive increases in land clearing over recent years. The data are often disputed on the basis that some clearing is of woody weeds or regrowth. Is that a reasonable excuse? There is no big picture data to help determine whether the regrowth should be encouraged, not cleared.

There are also severe concerns with the renewed Regional Forestry Agreements and the attitude to logging in native forests, particularly koala habitat. Detail about these issues is covered by the Nature Conservation Council.

No matter what data are revealed the area of native vegetation needs to be increased significantly, not decreased, to halt the trend of land degradation and species extinction.

A statewide campaign to protect Kosciuszko National Park from destructive feral horses has forced the government to debate its controversial Wild Horse Heritage Act. This will occur on 22 August.

Meanwhile the number of horses is increasing and the damage to the fragile mountain ecology worsens as the government has suspended the removal program.

The proposal to raise the Warragamba Dam wall by 14 m may have hit a couple of stumbling blocks:

It has been stated that the objective of the proposal is to reduce the impact of flooding of the Hawkesbury-Nepean floodplain by holding back water after heavy rainfall for longer. However some of the charts from modelling the effects of the wall raising prepared for the EIS were leaked to the Sydney Morning Herald.

As Figure 1 shows there is very little change in the water outflows during a likely flood event.

In the case of a major flood such as the 1867 flood that is the highest recorded, the picture is similar. This level is believed to be equivalent to a one-in-500 year event (see Figure 2).

The reason for the small reduction in flooding is that there are major rivers that flow into the Hawkesbury-Nepean system below Warragamba Dam such as the Nepean, Grose and Colo. This compounded by the flow downstream being held back at a number of pinch points where the river valley narrows. 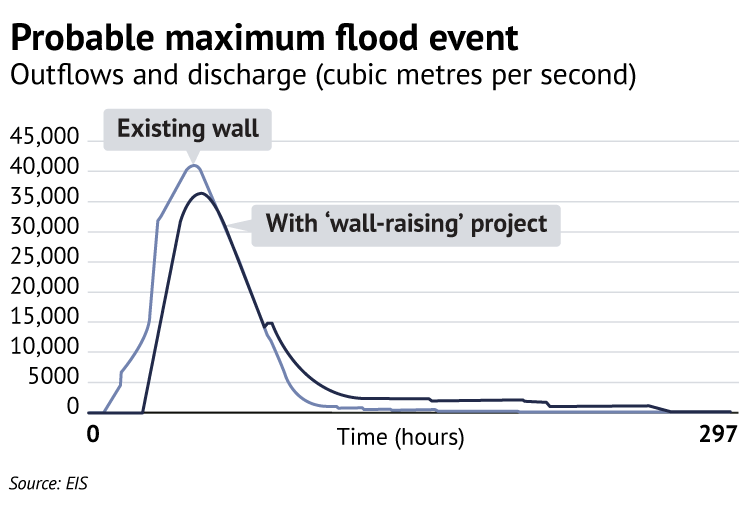 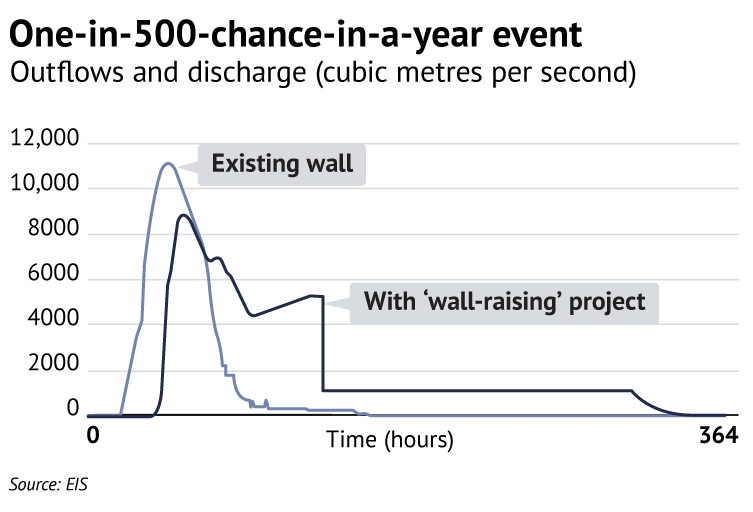