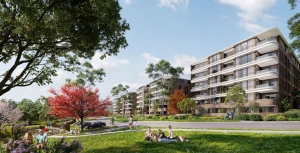 A major redevelopment was planned in 2008. Plans have now been submitted to Ku-ring-gai Council for the final stage of this development on the San Hospital site. The concept plan for the developments was approved in 2010 by the Department of Planning under the controversial Part 3A process under the Environmental Planning and Assessment Act that took consultation out of the hands of councils and the community. Nevertheless, the plan ended up being significantly smaller than the original application submitted in early 2007.

STEP, the local community and local councils strongly opposed the plans. The department ruled that several reports submitted by the developer engaged by the SAN were inadequate.

The final stage covers the construction of four apartment buildings, one on Fox Valley Road and three behind the school with an access road from Fox Valley Road with traffic lights.

The design is for 178 apartments with 222 car parking spaces plus visitor parking. The approved plan was for 200 apartments in five buildings but, following Adventist school and local community consultation, more open space was allocated for use by the school.

A new set of traffic lights will be built near the entrance to the school and apartment complex. This is only a couple of hundred metres from the traffic lights at the entry to the hospital. Despite the claims that the new development will not worsen the current congestion this seems implausible.

During the prolonged approval process it was found that the ecological reports commissioned by the developer Johnston Property Group were seriously inadequate.

Ku-ring-gai Council vegetation mapping showed that proposed new housing on the eastern side of Fox Valley Road and creation of a new road would have destroyed one of the finest examples of vegetation transition from shale to sandstone soils. Also the vegetation mapping of the whole site confirmed that there were significant areas of critically endangered Sydney Turpentine Ironbark Forest and Blue Gum High Forest. The integrity of these areas would have been damaged by asset protection zone requirements.

When the mapping was corrected the areas of STIF and BGHF were sufficient to alert the federal Department of Environment (whatever it was called at the time – see note) of the potential damage to these critically endangered ecological communities under the Environment Protection and Biodiversity Conservation Act. The department ruled that the development was indeed a significant risk and made the development a ‘controlled action’. This means that the biodiversity management is subject to regular review and is detailed in a biodiversity management plan.

In the end the reduction in the residential development areas increased the bushland area from 18 ha to 34.1 ha, all zoned as E2, environmental conservation. The Adventist Church is responsible for implementation of the biodiversity management plan. A volunteer group called Wahroonga Waterways Landcare group managed by Adventist Aged Care also assists.

There is a huge amount of work to be done to restore the areas that were neglected for many years. However, the area along Coups Creek is magnificent bushland and is open to the public to enjoy. The area on the eastern side of Fox Valley Road is more problematic as a large part of it was reserved as a corridor for the freeway linking the F3 and M2 that was finally abandoned in 1995 (see Coalition Against the Lane Cove Valley Freeway 1988 to 1995: An Amazing Community Achievement. Some of this land is still owned by the NSW Department of Planning that doesn’t appear to be taking any action to control weeds like lantana and ochna.

2016–20, Department of Environment and Energy

2020 to present, Department of Agriculture, Water and the Environment