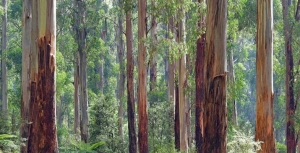 NSW has two million hectares of public native forests along the coast. They are home to diverse wildlife and myriad forest ecosystems. Currently the primary use of these forests is timber production. Native forest logging takes place under regional forest agreements that are supposed to provide for ‘sustainable forest management’. Yet there are numerous examples of scarce hollow bearing trees and trees that provide koala habitat being felled. Forestry Corporation has been fined by the EPA multiple times for breaching forestry rules.

The loss of large areas of forest during the Black Summer bushfires has made the habitat provided by these forests all the more critical. Several species have been added to the threatened list since the fires, such as the koala, gang-gang cockatoo and greater glider.

These forests are also important for filtering water, slowing floodwater flows and storage of carbon. Forests can also provide opportunities for tourism and recreation both active and passive, such as bike riding, sightseeing and bushwalking.

In an attempt to end native forest logging a petition was launched by NSW Young Greens Indigenous Officer Takesa Frank and the Nature Conservation Council. It received more than 21,000 signatures which has forced parliament to respond.

The petition called for the NSW government to:

The responsible Minister for Agriculture, the Hon Dugald Saunders, was dismissive. He claimed that the views of the 21,000 people who signed the petition are insignificant.

Some of the government’s arguments made in their response can be refuted, for example:

Cost-benefit analysis of the industry In the South Coast

A study by Frontier Economics found that there is economic benefit from ceasing native forest harvesting in the Southern and Eden forest regions of NSW. The economic analysis measures the stream of costs and benefits over a 30 year period to 2051. The net result was a gain of $62 million if the state-owned native forests are no longer harvested.

The report took a simplified approach by restricting the analysis to compare the existing operations with the creation of a mountain bike park. This covered:

More complex factors were not included such as the value of wildlife saved and visitor tourism apart from mountain biking.

In conclusion, Frontier Economics found that Forestry Corporation NSW’s hardwood business made a normalised profit of $0.4 million in the financial year 2020, and an average normalised profit of $2.3 million over the five years to 2020. This is a very small profit and significantly smaller than the $64 million five year average over the same period earned by their softwood plantation business.

This poor return should be taken in context with the economic benefit from ceasing native forest harvesting and obtaining environmental and recreational services from the forest. This, along with the environmental concerns, has led Victoria and WA to decide to cease logging their native forests and to provide significant financial support to the industry to transition to a greater focus on plantation operations and other sectors of the economy. Now it’s time for NSW to also make the commitment.

Currently, logging operations on private property in many areas have dual oversight from both the state government and local councils. Local councils have the ability to limit and control logging operations within their region. Just this month the National Party tried to revive the ‘koala wars’ by introducing a bill before the NSW parliament to remove this control. Fortunately several Liberal MPs threatened to vote against the bill and it has been withdrawn.