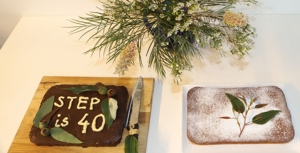 Our 40th birthday party on 22 July was a great occasion to remember the bold actions of the STEP people who developed great ideas for doing a better job of caring for our local bushland and fought against some very destructive proposals.

Two of our pioneers were Helen Petersen and John Burke. They both provided some insights into their work in their presentations to the audience that are reproduced below.

I have been asked to give a short overview of STEP’s early days and their achievements.

Looking back 40 years the following cannot really convey the difficulties we faced and overcame. Public awareness of the value of urban bushland has changed somewhat for the better which has filtered through to bushland managers.

After living in Singapore and Tokyo for seven years in the sixties, returning to South Turramurra made me realise how Sydney was so fortunate to have such wonderful, diverse bushland.

After the netball courts’ development in South Turramurra it became clear that our remaining urban bush needed protection and care. Thereafter a small group of STEP members continued on the long journey towards the present major force which STEP is today, caring for the environment.

Firstly we prepared a constitution and then became incorporated as STEP Inc.

Under the direction of Robin Buchanan we produced an impressive plan of management for South Turramurra bushland. This was the first of STEP’s publications, and is still respected today. This plan was so popular, two editions were sold, providing STEP with considerable funds.

In addition to these endeavours we realised that we had to engage and re-establish our contact with Ku-ring-gai Council in a more meaningful way. After successful lobbying by STEP, council formed a bushland management working party on which STEP was represented by two members. Major issues were discussed and acted upon. Further to this we established contacts within the North Shore Times and then Hornsby Advocate.

Several STEP members also worked under Joan Bradley’s tuition in the Mosman area, carrying out her method of bush regeneration. We also taught, through the National Trust, small groups in the Bradley method. We applied this knowledge while working with volunteers in South Turramurra’s bushland.

The STEP Track was also created by volunteers and is still maintained today. As well we led groups on walks through the Lane Cove Valley.

A significant event occurred when Ku-ring-gai Council was awarded a Commonwealth Employment Grant to employ four young people together with a trained supervisor to regenerate Fraser Park in Wahroonga. Here was the opportunity to showcase a large area of the park using the Bradley Method in moderately weed infested sections, as well as tackling severely degraded areas with other less sensitive methods. This involved the careful use of Round-Up administered only by the supervisor, together with the physical removal of some established weeds, such as privet.

Over the period of a year the natural regeneration in the Bradley treated areas was remarkable. However, in the formerly badly degraded sections there was no regeneration of indigenous species. Therefore we prepared a list of plants local to Fraser Park which we gave to council’s nursery team for propagation purposes. When grown these plants were successfully introduced to the relevant areas. The combination of all of these methods produced significant results. To this end the feasibility and cost effectiveness of a fulltime regeneration team in Ku-ring-gai was established. 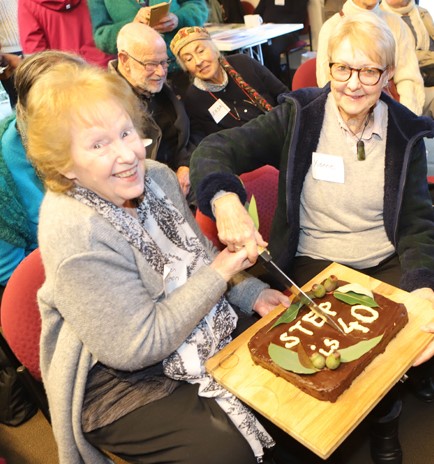 While working in Fraser Park we also provided knowledge to residents whose properties were adjacent to the bush, thereby stopping the dumping of garden refuse. In addition, many complimentary letters were received by council from residents having witnessed the transformation of their bush.

Council was also given three framed prestigious awards for Fraser Park from outside organisations. They were gratefully received by council and hung in the Parks Department.

In 1985 STEP was successful in obtaining a Commonwealth Employment Program Grant which provided funding for six people to work on a major regeneration project at Browns Field. Browns Field was chosen because of its special significance and, I believe, the work there is still continuing. 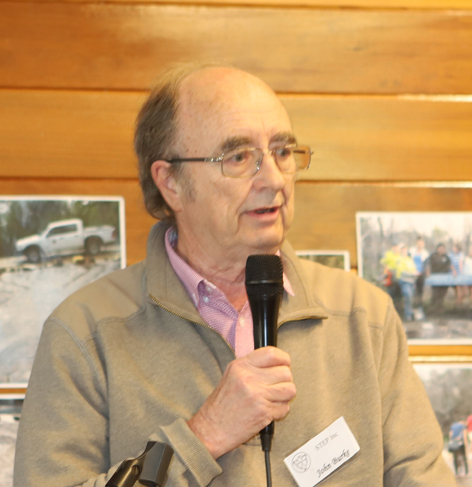 It’s great that the STEP’s 40 year history has been written. Reading it you will get a sense of the thousands of hours of work that the committee has put in, of the hundreds, if not also thousands, of reports, submissions, responses to draft plans, meetings, publications and site inspections and the huge amount of administration needed to keep such an organisation in business.

Saving the world is indeed not a spectator sport. It’s hard work.

Now everything that I’m going to say will be in the book but there are some points that I think are worth mentioning. In the brief time allotted to me I want talk about some of the things STEP has done. Give me another hour or so and I could talk about the wonderful people, some of whom are here today, who have been the doers. Many of them are of course mentioned in the book.

While there is, and will always be, much to be done – it’s also clear that a lot of progress has been made over these 40 years.

In the days before bushland management existed, it was seen by those with responsibility for bushland as not much more than an area reserved for roads, playing fields, garbage tips and the like. Indeed, twice, to my knowledge, councils had to be stopped from turning part of the Lane Cove Valley into a garbage tip. One of the reports on the proposed Lane Cove Valley Freeway spoke of how the views for motorists would be excellent if the road went through the middle of the bush. A version of enjoying it while destroying it. That was the sort of thinking that had to be changed, and to some extent, has been.

While STEP was of course not solely responsible for changing things in Ku-ring-gai and surrounds, we did have quite an influence. But there was a wide awakening throughout the whole community. The Lake Pedder and Franklin Dam campaigns from the late 1960s to the early 1980s were testament to that. More locally, the Bradley sisters developed bush regeneration and groups like STEP and KUBES emerged.

Ku-ring-gai was prevailed upon to form what was called the Bushland Management Working Party. Helen Petersen joined as STEP representative and I as a community representative. Janet Fairlie-Cuninghame and Harley Wright were there too. Jane Gye and others came later. Councillors and staff were there at first but soon lost interest. I reckon that was because they didn’t know what we were talking about and assumed it would all come to nothing. So for a while we ran the show ourselves and made recommendation after recommendation to council through the Parks and Reserves Committee where we had a seat. Many of those recommendations were approved by council, but not many acted upon.

A major achievement of the Working Party was the writing of a plan of management for
Ku-ring-gai bushland. We believed it was the first such plan in Sydney and perhaps in the state. Council adopted it in 1984.

Council funded a huge report on all of its bushland by Robin Buchanan, and a film and brochures and suddenly we were seen in a different light. People like Robin Grimwade started coming out of the universities with environment degrees and the nature of council’s staff changed for the better. The relationship with the Working Party changed from one where we were dragging council along to one where the staff felt that they had the better credentials. We had won and settled down into different sort of relationship with council and its staff. The role became more that of supporting staff against the ignorance of the councillors as well as keeping the staff focused.

One important issue was the proposal for the Lane Cove Valley Freeway. This road would have bisected the valley, bisected parts of suburbs and created noise and nuisance without achieving much. It was a radial route to the CBD while the actual need was for a route that allowed vehicles to bypass Sydney rather than head for the Harbour Bridge. We produced a position paper that set out the traffic and environmental reasons for opposing it, were joined by people like Bruno Krockenberger and participated in the Coalition Against Lane Cove Valley Freeways where Elaine Malicki was so effective. We were there at the start of that campaign and we saw it through. We supported the tunnel under Pennant Hills Road through further enquiries and, along with those supporting our views, won the day.

We of course had other wins, the solution to the dangerous corner on the Arterial Road below Koola Ave saved bushland and saved council millions, the amendments to the UTS Lindfield and Adventist developments are other examples. Probably more important, however, was, and still is, our ability to participate in the debate, to influence opinions and thus to achieve better environmental outcomes. We often lose our environment by a series of small decisions. Pushing back to change the conventional wisdom bit by bit is the other side of that coin.

STEP, along the way, also broadened its outlook from the very local to the wider Australian and world issues as we realised that they are all interconnected.

One issue that we took up was that of population growth and STEP has been the only environmental group that I know of to campaign on the issue. None of the three major political parties want to talk about it, environmental groups such as ACF and NCC run a mile despite it being perhaps the most important environmental threat facing Australia and the world. State governments and our councils hide behind the fallacy that it’s all the Australian government’s doing and out of their control.

It’s hard to think of an environmental problem that would not be a lesser threat with fewer people on the planet, in Australia and in Sydney. In Australia, at our current rate of growth we are doubling every 45 years. That means that Sydney will have 18 million in the probable lifetime of my grandchildren and Australia 100 million. This seems to be exactly what Lucy Turnbull’s Greater Sydney Commission wants. So goodbye backyards and urban bushland and hello to another World City. Tokyo is a world city – you can go up their tall tower there and look down over hundreds of thousands of dwellings and play a game of spot-the–tree. With our atrocious record on extinctions, degrading our river systems, dry land salinity and the rest it’s surely time to at least talk about it.

The fact is that, on present trends, we could still accept 70,000 immigrants a year while stabilising our population in the decades ahead. Plenty of room for refugees there, no need to run the risk of being called xenophobic, or racist! Of course there are plenty of countries with stable or declining populations that are doing very well. Japan, again, is still the third biggest economy in the world with a huge untapped workforce in its women and a declining population.

As I said earlier, I haven’t mentioned the wonderful individual members of the STEP committees. We have been fortunate to have a succession of very competent people over 40 years who have run and still run STEP. Some are here today and more are mentioned in the history that has been published. They deserve our admiration and our thanks.

In summary, STEP has been effective and STEP has made a difference and so all the work has indeed been, and continues to be worthwhile.