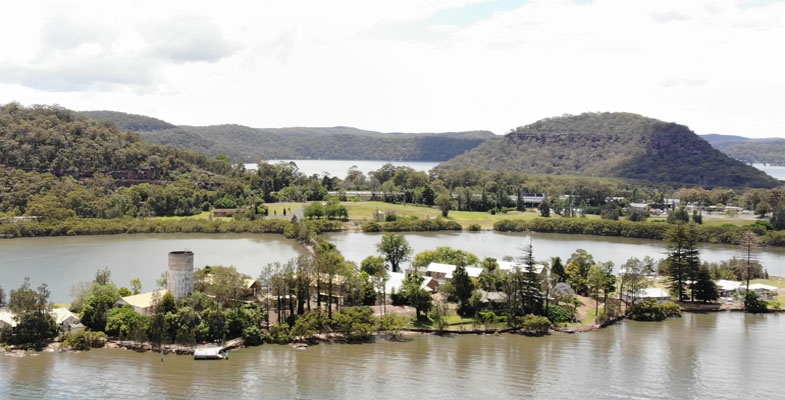 As one drives north along the M1 towards Gosford and cross the Hawkesbury River Bridge one has magnificent views of the river and the dense bushland on the surrounding hillsides.

Heading south there is a spectacular view of the sandstone cliffs created by the river and the cuttings that were made to build the freeway that now allows easy access from the Central Coast to the metropolis of Sydney.

To the east there are two islands, Long and Spectacle. The natural values of the whole area are preserved as all these lands are national parks or nature reserves. The only development is low key with some houses clinging to the water’s edge or on available flat land such as in Brooklyn, Mooney Mooney and Dangar Island.

There is one area of development that has stood untouched for many years on Peat Island. This island originally housed a centre for treatment of alcoholics that was opened in 1910. It was later a general psychiatric hospital and a residential care centre for people with intellectual disabilities. It was closed in 2010 in line with the government policy to close down large institutional care centres. There are many historic buildings on Peat Island plus a chapel on the east side of the M1.

The nearby lands are the only flat areas available on the Lower Hawkesbury for community use. They provide access and views for the Lower Hawkesbury. In addition, the area contains many sites of cultural, heritage and spiritual significance to Indigenous and non-indigenous Australians.

The NSW government has been trying to sell off the land on Peat Island and on the narrow peninsula adjoining it near the M1 and Pacific Highway. In 2014 they proposed the development of 450 houses, mostly medium density building plus retail, tourism and community facilities. Fortunately it was knocked it back. It was totally inappropriate to have so much development in an area with no public transport or employment opportunities. The dwellings could end up being mostly holiday houses and make no contribution to housing needs.

The Central Coast Council is currently considering a new concept plan proposal from the Department of Planning. This still has a significant amount of residential development on the land alongside the M1 with 105 houses and townhouses and medium density buildings with up to three stories with 162 apartments.

Peat Island would be transformed into a tourism and accommodation precinct, with supporting cafes, restaurants and the like to be accommodated in retained historic buildings and the addition of new buildings.

The chapel on the eastern side of the M1 has pedestrian access to Peat Island via an underpass. The precinct includes several historic cottages. The plan is to adaptively repurpose these buildings for community use plus the possibility of a community centre. However the whole area would be surrounded by some of the new housing.

There is also a possibility of a marina that Hornsby Council’s submission explains would cause several environmental issues such a damaging the estuarine mangrove environment and disturbing sediment contamination including asbestos.

These issues are apart from the fact that it would be totally out of keeping with the scenic landscape of the Lower Hawkesbury.

Hornsby Council’s submission also points out this level of development in an isolated area will exacerbate existing inadequate water and sewage management and parking facilities and cause traffic congestion.

The local groups opposing the plans are the Central Environment Network and Dyrarubbin Peat Island Association. Their view is that the concept plan lacks the vision and depth expected for an iconic site of regional, state and national significance. Dyarubbin is the First Nations Darug people’s name for the Hawkesbury River.

STEP believes the land should be developed for a world class park as the natural, cultural, heritage, aesthetic, social and recreational values of the site far outweigh the value as a residential area. This park should link the historic buildings and landscape of Peat Island to the broad sweeping landscape west of the M1 and to the intimate space of the chapel precinct. The historic buildings of Peat Island can be sensitively repurposed for cafes, cultural centres, museums, and a marine/ estuarine research centre. The proposed housing in the chapel precinct should be deleted as it severely impacts the curtilage of this building.

Submissions closed just prior to Christmas. We hope that common sense prevails. The NSW government has created some outstanding public parks such as Bicentennial Park at Homebush Bay. This Peat Island Park could be another example.