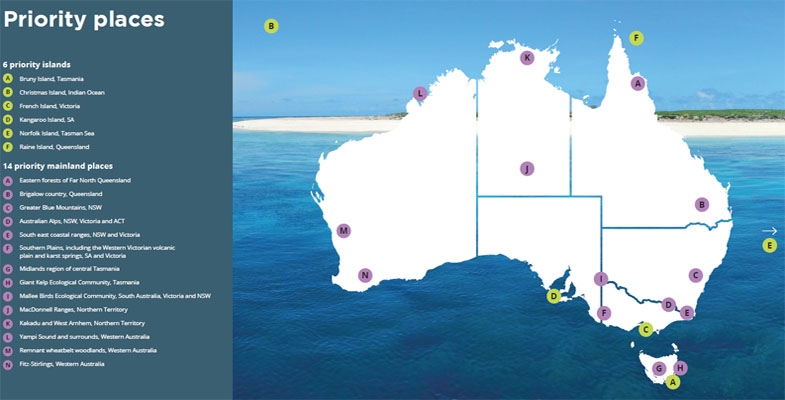 There is a plethora of international agreements that relate to the protection of the Earth’s biodiversity. The overarching convention is the Convention on Biological Diversity (CBD) that was signed by 150 government leaders at the 1992 Rio Earth Summit. Examples of other agreements are the Ramsar Convention that aims to protect internationally significant wetlands and the Convention on International Trade in Endangered Species of Wild Fauna and Flora (CITES). They don’t all work in isolation thank goodness! There is a Liaison Group of the Biodiversity-related Conventions.

The most recent major strategic plan to address the sad state of global biodiversity was the agreement to adopt the 20 Aichi Biodiversity Targets for 2010–20 period. The meeting was held in Aichi Prefecture in Japan; hence the name.

However, according to an assessment by the United Nations, none of the 2020 Aichi targets were met. At the moment, committing to the Aichi targets is voluntary and results from each party are self-reported to the CBD. Because these agreements are non-binding, the path to translating and implementing targets into national legislation is unclear.

One major reason for the lack of progress has been the continuation of subsidies and other incentives potentially harmful to biodiversity. An estimated $500 billion in government subsidies potentially cause environmental harm, according to the UN report.

One area of progress is the target relating to the establishment of protected areas. The objective was that by 2020, at least 17% of terrestrial and inland water, and 10% of coastal and marine areas, especially areas of particular importance for biodiversity and ecosystem services, are conserved. This target has been nearly met with 15% of land and 7% of oceans being protected by 2020.

The countries that signed the CBD have their own COPs (Conference of the Parties) just like the UN Framework Convention on Climate Change. The 15th meeting is a whole series of meetings with the first held in 2021 to develop a strategic plan post 2020. This meeting was hosted by China from the city of Kunming. Parties to the CBD adopted the Kunming Declaration to keep the political momentum of the negotiations delayed by the COVID-19 pandemic.

the unprecedented and interrelated crises of biodiversity loss, climate change, land degradation and desertification, ocean degradation, and pollution, and increasing risks to human health and food security, pose an existential threat to our society, our culture, our prosperity and our planet.

The declaration includes a long list of principles that are being developed into a Post 2020 Global Biodiversity Framework for actions. The framework is built around the recognition that urgent policy action is required to turn around the trend of biodiversity loss. The objective is that the trend should stabilise in the next 10 years (by 2030) and allow for the recovery of natural ecosystems in the following 20 years. The ultimate goal is to achieve the Convention’s vision of ‘living in harmony with nature by 2050’.

The Declaration notes a first step, the pledge by many countries to protect and conserve 30% of land and sea areas through well-connected systems of protected areas and other effective area-based conservation measures by 2030. This known as the 30 × 30 pledge.

More than 100 countries have pledged to adopt this goal including the USA. Joe Biden announced his commitment a week after he became president.

There are lots of other goals in the Kunming Declaration. The details of measures to achieve these goals will be hammered out at COP15 of the UN Convention on Biological Diversity in Montréal, Canada, from 5–17 December 2022.

The Minister for the Environment, Tanya Plibersek, in releasing the 2021 State of the Environment Report, announced that Australia will aim to exceed the 30 × 30 agreement. This will require additional 50 million hectares of landscape to be protected. This does not need all to be in national parks.

Under the government’s plan 20 places and 110 species will become the focus of conservation efforts selected based on several factors including their uniqueness and risk of extinction. The areas include the forests of Far North Queensland, Kakadu National Park in the Northern Territory and Kangaroo Island in South Australia.

This announcement raises many questions. As the Chief Conservation Officer of the World Wildlife Fund points out, Australia has more than 1,900 listed threatened species. This plan picks 110 winners. It’s unclear how it will help our other ‘non priority’ threatened species such as our endangered greater glider.

An article on the NPA NSW website explains the task at hand. The WWF commissioned protected areas spatial analyst Dr Martin Taylor to estimate what it would take to create a truly ecologically representative network of protected and conserved areas as part of the 30% target.

In NSW, 7.6 million hectares of land occurs in the National Reserve System, equivalent to just 9.6% of the total land area. Moreover, more than 60% of ecosystems have less than 15% of their area protected.

Achieving significant progress towards protecting 30% of NSW would require not just a significant expansion of legal protection, but also revegetation and rewilding of millions of hectares of long-cleared lands in the sheep and wheat belt. This would require significant investment from state and federal governments as well as corporate and philanthropic support through natural capital markets. In some cases creation of new protected areas may be contested by some locals. It is also becoming less realistic as global heating and extreme weather events worsen.

Completing the transition out of native forest logging could secure an additional two million hectares of public native forests. Transfer of Crown lands, including large areas of travelling stock routes with high conservation values, to NPWS or Indigenous communities for conservation management, would need to be a major contributor to the 30% target. Supporting First Nations to voluntarily declare additional Indigenous Protected Areas could play a key role. Purchases of large pastoral stations in the Western Division could provide land justice for Indigenous communities through handback or co-management, and diversify rural economies as global heating increasingly makes some grazing and farming enterprises sub-economic.

The Biodiversity Conservation Trust’s capacity to support private landholders to establish conservation agreements would need to be greatly expanded – without relying upon perverse offsets – including through innovative partnerships that also deliver carbon outcomes with social, cultural and economic co-benefits.