The battle continues against coal mining under the water catchments in the Illawarra but there are some hopeful signs that the NSW Government could start to see sense about the environmental damage that is occurring.

Sydney is fortunate to have a pristine water supply on its doorstep. In theory the water catchments are protected as development and agriculture are prohibited. In the Special Areas in the Illawarra catchment anyone entering the land without permission can be fined $44,000. These catchment areas contain bushland and natural systems such as coastal upland swamps that slow water movement and filter the water that flows into dams such as the Avon and Cataract. Many other cities have to pay millions of dollars to operate synthetic filtering systems of their water supply.

Mining has been undertaken in the Illawarra region since the 1880s but in the early days the methods used were pick and shovel and later machinery that took out small sections of the coal seam. The mine ceilings and walls were supported by the bord-and-pillar method. Since the 1960s the technology for longwall mining has been developed that vastly increases the rate of removal of coal and, incidentally, cuts the level of employment significantly.

The coal is removed by a massive machine that shears away the wall beside it whilst hydraulic powered supports hold up the roof. As the coal is removed, the machine supports are moved forward and the roof is collapsed behind them. The areas of rock extracted are 150 to 400 m wide, 4 m high and can extend for several kilometres. When one longwall is completed another is started leaving a rock support of about 50 m in between.

As such a large section of coal is removed the roof above the longwall collapses. Depending on the nature of the rock above, minor cracking can occur in the strata above, but frequently major cracking has occurred right up to the surface. Cracking leads to water leaking from the creeks and wetlands, pollution from the release of excess minerals from the underlying rocks and cliff falls.

Concerned locals have been documenting the damage over the past ten years and have been leading a campaign to raise awareness of the damage and making detailed submissions explaining the concerns about current and future development applications. This group was formalised by the creation of the Protect Sydney’s Water Alliance in 2013, a network of more than 50 community groups from across Sydney, the Illawarra, Southern Highlands and Blue Mountains.

The Illawarra mines all produce coal for steel making. They make up a complex array of cavities under a region that has reliable rainfall and therefore is a significant source of drinking water for Sydney as well the large population of the Wollongong region. The main miners are:

There are two current controversial applications for extension of current mining operations.

In Issue 180 of STEP Matters we wrote about the Planning Assessment Commission’s (PAC) report on the application to develop eight new longwalls. Wollongong Coal failed to convince PAC that it can expand the Russell Vale colliery without causing substantial and irreversible damage to Sydney’s drinking water supply.

As the mining approvals have run out the mine was closed six months ago, and the entire workforce was sacked. But the company seems undaunted and has continued with the expansion application.

The second review of the mine expansion by PAC has just been released and has reinforced the previous opinions. Despite acknowledging the short-term benefits of the project – which includes the provision of 300 jobs for five years, about $23 million in royalties to the NSW Government and $85 million in capital expenditure and other direct and indirect flow-on effects – PAC concluded that:

On the basis of the information provided, the Commission is of the view that the social and economic benefits of the project as currently proposed are most likely outweighed by the magnitude of impacts to the environment.

In particular, PAC identified the risk of water loss, risk to upland swamps, noise impacts on nearby residents, potential hydrogeological impacts and a loss of ecosystem functions.

PAC is not satisfied that the project is consistent with the State Environmental Planning Policy (Sydney Drinking Water Catchment) 2001 that it would have a neutral or beneficial effect on water quality in the catchment area. The magnitude of water loss is uncertain with the projected range from the proponent and Water NSW varying from minimal to 2.6 GL/year. PAC considers this is a high risk situation. Sydney Water has valued the potential water loss at a cost of $23 million over 25 years. The cost of government subsidies are also estimated to be $23 million. The expansion is economic as well as environmental madness.

A separate issue is the financial viability of the company itself.Wollongong Coal currently has no capacity to repay its debts unless it is thrown another financial lifeline by parent Jindal Steel & Power (Australia) Pty Ltd. The company is currently suspended from trading on the Australian Stock Exchange. If the project falls over the company has no capacity to remedy any damage it could cause to the catchment.

Under legislation passed in 2014 in response to ICAC findings the Minister for Resources can deny a mining application if the proponent is not deemed to be ‘fit and proper’. The Environmental Defenders Office has presented a strong portfolio of evidence that Wollongong Coal fails that test. The minister’s response is so far non-committal. This is the first time a decision is being made under this legislation so it may take a while to consider the precedent it may establish.

The final decision is in the hands of the government.

The Dendrobium Mine was approved in principle by a Planning Assessment Commission in 2001 and significantly expanded in 2012 despite great concern to those watching the significant damage that had already occurred to every swamp that was above an existing longwall.

The company is now applying for a further expansion closer to Avon Dam. Protect Sydney's Water Alliance objected to the expansion for several reasons:

The closing date for submissions is 15 April. Click here to make a submission.

This mine was given approval for major expansion in 2009 despite major damage already occurring to the Waratah Rivulet and failed attempts to remediate the cracks using polyurethane resin injections. Peabody Energy is currently in financial straits because of the fall in the coal price. However, it is expected that the company will apply for a further expansion in the near future.

The issues raised in the PACs report apply to all the other mines in the catchment. It is hoped that heed will be taken of the strong opinions of the report when the current expansion plans of the Dendrobium and, possibly, future Wongawilli and Metropolitan mine expansion applications are considered. 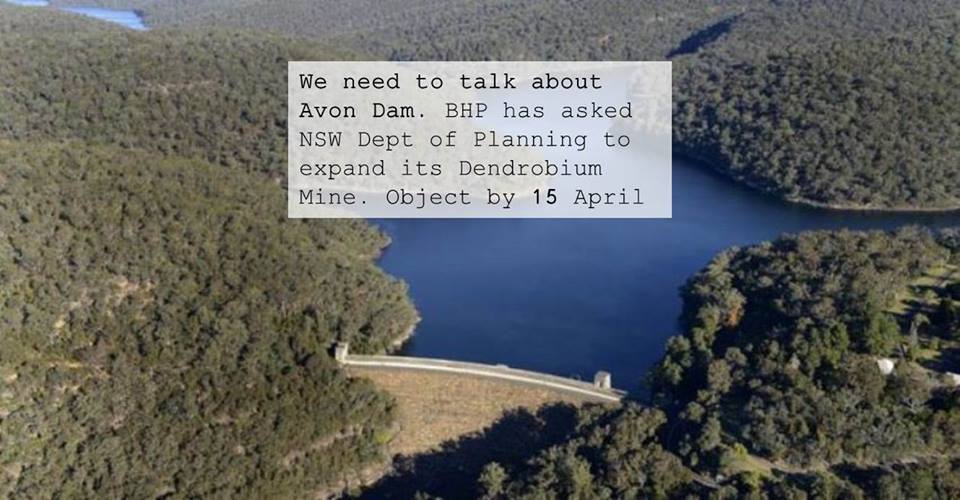