It isn't Easy being Blue – Cost of Colour in Fairy Wrens 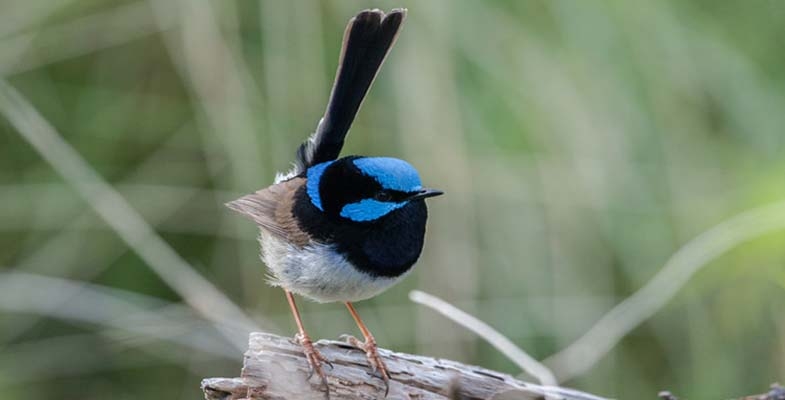 Male superb fairy-wrens change colour every year, from dull brown to bright blue. But being blue may be risky if you are a tiny bird that is easily spotted by predators.

For many males, having beautiful colours is important for attracting choosy females. Researchers think attractive colours come with a cost, so that only the highest quality males can afford to display them. This may be helpful to females looking to select the best mate.

One possible cost of bright colours is increased predation risk, as bright animals are easily seen in their natural habitat. This cost can be dramatic (i.e. being eaten) but may more often involve changes in behaviour to mitigate risk, such as spending more time scanning for predators and being more responsive to perceived threats. Such behaviours are costly because they reduce the time available for foraging and are energetically expensive.

A relationship between bright colours, predation risk and cautious behaviour may seem intuitive; however this is difficult to test. This is because different coloured animals may also differ in their age, size, escape tactics and personality, which can influence both their behaviour and actual predation risk.

To address this, we tested whether individuals adjust their response to risk according to changes in their plumage colour.

Superb fairy-wrens are small, charismatic songbirds. They live in groups with a dominant male and female and, often, several younger males.

These birds are vulnerable to predators such as kookaburras, butcherbirds, currawongs and goshawks. When a group member spots a predator, it gives an alarm call to warn the others. In response, other group members may race for cover, or ignore the alarm and continue about their business.

Male fairy-wrens change colour by replacing dull brown feathers with bright blue, black and indigo ones prior to breeding, turning brown again after the breeding season is complete. Individuals change colour at different times of the year, ranging from the Australian autumn (March to April) to late spring (October).

Although female fairy-wrens have a stable, social partner, when egg-laying time comes, they briefly leave their territory under the cover of darkness and “visit” the male who became blue earliest in the year. Many of the females in the surrounding area prefer the same male, who may father around 70% of the offspring in the neighbourhood. These attractive males are blue for longest (remaining blue for 10-12 months of the year) and so may face the greatest risk of predation.

We gave fairy-wrens different coloured leg bands, allowing us to follow the same individuals over time.

We compared the behaviour of the same males while they were brown and blue, as well as males that remained brown or blue throughout the study. This meant we could test for the effect of colour on responses to perceived risk while accounting for individual differences and possible seasonal changes in behaviour.

We estimated cautiousness in the birds by testing their response to alarm calls. This involved sneaking up on unsuspecting fairy-wrens in their natural habitat and broadcasting fairy-wren alarm calls from portable speakers.

Costs of being Blue

Responses to the low-danger alarm included fleeing for cover, an intermediate response (such as ducking or looking skywards) and no response, when the alarm was ignored. Fairy-wrens fled immediately after hearing the high-danger alarm, but differed in the time taken to return to the open.

We found that fairy-wrens were more cautious while blue; they fled more often after hearing low-danger alarms and took longer to emerge from hiding after fleeing in response to high-danger alarms. Blue fairy-wrens also spent more time scanning their surroundings and less time foraging compared to brown wrens.

This suggests that fairy-wrens perceive themselves to be at a higher risk of predation while bright blue and adjust their behaviour accordingly.

Intriguingly, fairy-wrens also adjusted their behaviour according to the colour of other wrens in the group. When a blue male was nearby, wrens were less responsive to alarm calls and devoted less time to keeping a look-out.

Perhaps this is because fairy-wrens view blue group members as colourful decoys in the event of an attack. This could occur if predators are biased towards attacking the most conspicuous animal, which reduces the predation risk for surrounding individuals. Brown wrens could also be taking advantage of the greater time blue males spend scanning, allowing them to lower their guard.

Being blue for longest gives males the best chance of attracting females, but they need to be extra careful lest they get eaten before it comes to that.