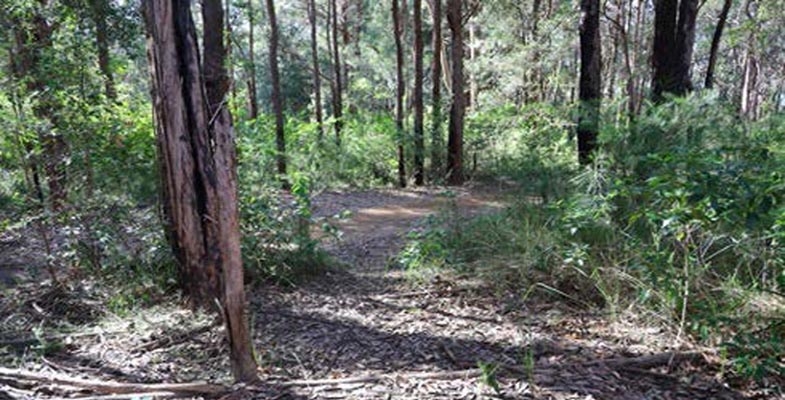 Near the end of Quarter Sessions Road in Westleigh there is a large area of land (34 ha) that was owned by Sydney Water until it was bought by Hornsby Council in 2016. This site has had various uses over the years; a training site for the RFS and a dumping ground for asbestos. There is a large area of bushland near the Sydney Water reservoir. Most of the land not been managed for many years.

As there was no management of the bushland, local mountain bike riders have built a huge network of trails and claimed the area as their own, calling it the H2O facility. Many of these trails go through a large area of high quality critically endangered Sydney Turpentine Ironbark Forest (STIF) and endangered Duffys Forest. The future survival of these forest areas is at risk from the bikes riding over tree roots, soil compaction and weed invasion. The activity also disturbs the wildlife especially as night riding is occurring. The other areas of bush are also valuable and contain threatened plants and orchids.

Hornsby Council drew up a master plan for the site. Submissions were made in June 2021. The plan proposed that most of the network of bike trails in the endangered forest areas be closed and rehabilitated. The trails would be relocated to the edges and away from high value biodiversity. The trails in the other bush areas would remain and be upgraded.

So what has happened since? There have been various forms of consultation with local residents, bikers and conservation groups. Basically the mountain bikers are very unhappy about losing the trails in the forest and have been actively lobbying the council. STEP and all the local conservation groups want the trails removed from the endangered forests.

In fact, council’s development of the Westleigh Park site has to heed the conservation advice for STIF issued by the Australian Government in response to its listing as critically endangered under the EPBC Act. This states that the priority recovery and threat abatement actions required for this ecological community are:

A series of workshops was held in June with representatives of the mountain bikers, environment groups and local residents. The plan was to resolve the impasse and come to a consensus on where the trails should go. Council could then proceed with the next stage of the development process in getting detailed environmental information and approvals. This was a very time consuming process (13 hours in total) that basically came to no decision. Naturally the conservation groups and the local residents wanted the illegal trails removed. The bikers argued that the trails were of great benefit for teaching young riders new skills and a love of the bush in the lovely shady trails. The forest in the STIF area in particular is mostly level and ideal for learner riders.

So the ball is back in the court of Hornsby Council where it should be. No news has been heard from council. H2O is still in operation so the damage continues and no action is being taken to close the endangered forest areas and start their rehabilitation. This laissez faire attitude is reprehensible.