Fungi of the Lane Cove Valley: diversity, distribution and DNA 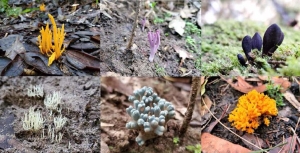 Fungi are poorly known. Of the estimated 3 to 8 million species in existence, only about 120,000 species ever have been named and described. This accounts for only 2 to 5% of the estimated total.

There are a number of reasons that fungi are under-described. First, fungi spend most of their lives existing as mycelial networks, hidden underground. Second, when we do see fungi, they are the reproductive fruiting bodies (mushrooms, toadstools etc). These are mostly small and ephemeral. And, these fruiting bodies often do not have many consistent, distinguishing characteristics.

Despite our lack of knowledge of fungal diversity, we do know that they perform essential roles in ecosystems. They have diverse roles, including as pathogens (causing disease to plants or animals), saprotrophs (breaking down dead animal and plant material) and mutualists (supporting the growth of plants). Almost all land plants form beneficial associations with fungi, as mycorrhizae (fungus root), so conservation of plant communities must also include conservation of their fungal partners.

There are two ways to approach fungal identification. Traditionally, people have used culturing of fungi and surveys of above-ground fruiting bodies. More recently, DNA-based methods have been used to directly survey fungal species in soil. However, a compromise approach combines field surveys with DNA-barcoding. This allows us to identify fungal fruiting bodies, initially to the genus level, and potentially the species level if the species has previously been formally described and then characterised using DNA. We have used this combination approach to identify club and coral fungi in the Lane Cove Valley.

We chose to investigate the club and coral fungi because they exhibit all the characteristics that contribute to fungi being poorly described. The fruiting bodies are small and have few distinguishing characteristics. They are often cryptic, and from our initial observations, seemed to include a range of undescribed species.

To plan our field work, we used John Martyn’s STEP maps to identify track segments of 1 to 2 km which we could survey in a single trip (fungal surveys move very slowly!). Over 2020 – 22, we have walked every track on the STEP maps multiple times during our fungal explorations of the Lane Cove Valley. We collected some thousands of specimens under our scientific permit issued by the Department of Planning, Industries and Environment. We are now in the process of extracting DNA to sequence and characterise local species.

Our study is far from complete, but we can already report some general observations. Many species in the Lane Cove Valley are undescribed, with up to 30 to 40% of specimens being new species. Club and coral fungi are not distributed evenly through the valley. These types of fungi are mainly found along creek lines, particularly those dominated by coachwood. Our observations suggest that the sides of creeks where sewer lines have been laid host lower fungal diversity and abundance than their corresponding sewer-free creek-sides. Creeks with no sewer lines are often rich in fungal species.

We have also noticed that areas dominated by weedy vegetation have different fungal communities. These areas have generally depauperate communities, with fewer fungal species and fewer fruiting bodies. When areas of weedy bushland are regenerated, this does not appear to be accompanied by recovery of the fungal diversity that is found in more pristine areas. We can often identify regenerated areas through their altered fungal species types and abundance, and refer to the fungi in these areas as fungal ‘weeds’.

In less disturbed areas of bushland, we have documented significant fungal hotspots. In these areas, there is elevated fungal diversity and abundance. There are three outstanding locations for fungal diversity in the Upper Lane Cove Valley. These are Rofe Park/Sheldon Forest, Browns Field, and Coups Creek. All these areas are sheltered valleys that face southwest, and all are likely to be nutrient rich. We think that these locations contain important remnant populations of native fungi that are worthy of conservation, similar to Lane Cove Bushland Park, a reserve dedicated to the conservation of endangered waxcap fungi. Notably, these areas are not within the boundaries of the national park.

Although our results are still preliminary, we can already see some potential implications for conservation and environmental protection. If bush regeneration schemes are not accompanied by natural fungal regeneration, we might need to use inoculum from known fungal hotspots to reintroduce the fungi that are missing from regenerated areas. Reintroduction of native fungi into these plant communities should improve their stability and resilience. Understanding the role of soil fungal diversity in regeneration and restoration of natural bushland areas could be key to the long-term success of conservation and preservation efforts.

Finally, there are clearly many new species of fungi in our region. The formal process of naming these will take many years, but is important for understanding and monitoring fungal ecology. During our surveys, there are some fungi that we have only ever seen once or twice. Since we have also seen multiple examples of extremely rare species of plants and animals during these trips, we think that these fungi are also rare and possibly endangered. There is certainly much more to be done to understand the fungi and their roles in ecosystems. 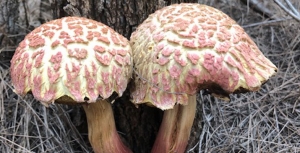 Our walk in Fox Valley on 14 April revealed some surprises. A Powerful Owl was spotted and there were several unusual examples of fungi as identified by John Martyn. 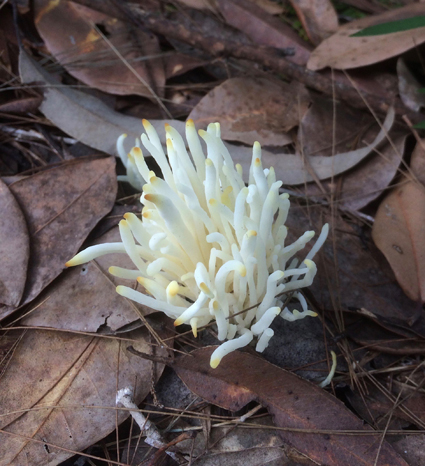 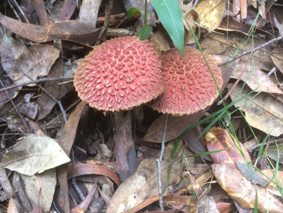 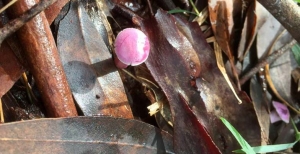