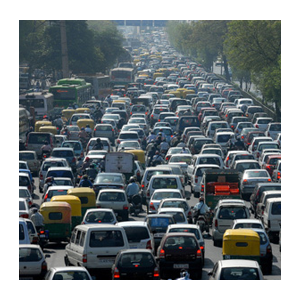 There is inherent conflict between the needs of the human population and the natural environment. We all live in houses on land that was once host to part of a natural ecosystem and we all travel on roads and railways that criss-cross the natural world and so compromise it. There are many more such examples.

The issue at hand is not so much that we have such impact, humans have rights too, it is more that there are so many of us that our scale and rate of destruction is such that we have seen, and are facing more, widespread environmental degradation, animal and plant extinctions and other inexcusable consequences.

It is for these reasons that STEP has strong views on human population numbers and on the way that we interact with the remaining natural environment. Here we are talking about the part that freeway standard roads play in the overall problem.

Our planners have always made the basic and inexcusable mistake of building roads to solve existing congestion problems without any regard to the additional congestion those roads will cause. As John Norquist, the former mayor of Milwaukee and transport expert, said at the City of the Future conference in Brisbane at the University of Queensland in November 2010, 'building freeways in cities is like loosening your belt to deal with obesity'. We couldn’t have said it better.

We loosened our belt with the widening of the M2 tollway in 2011. Improved travel times will be nullified by demographic feedback as people take advantage of the improved road to travel more often, to travel closer to peak times and to live further away from their work. Congestion will quickly return and create the inevitable demands for more roads.

STEP has participated in the debate about expressway construction for 30 years. We were very involved in the campaign that resulted in the proposed expressway through the length of the Lane Cove Valley bushland being abandoned and have participated by responding to all proposals such as the original M2 and the proposed F3 to M2 and M7 link.

The debate is more than the environmental and social harm done by, or the practical futility of some road projects. It is about the sort of city that we want Sydney to be, about whether we really want to have 9 million people in another 50 years and 18 million in 100, about why we don’t build an integrated transport network with emphasis on rail and public transport, about why we don’t take demographic feedback into account in our planning and, crucially, why none of our politicians are prepared to address the longer term planning issues and why they cannot see that there cannot be infinite growth in a finite world.

We have assembled below our key road publications and submissions, along with other relevant references and shall add to them as time goes by.

In 2002 the RTA commissioned, on behalf of the Australian Government, a study to identify a route connecting the Western Sydney Orbital (M2/M7) to the F3, in Sydney's north, to relieve pressure on Pennant Hills Road and Pacific Highway.

The F3 to Sydney Orbital Link Study, carried out by consultants Sinclair Knight Merz (SKM) examined three corridors (Types A, B and C) and ultimately recommended that the preferred route follow the Type A Purple Option, linking the F3 to the M2 via an 8 km road tunnel beneath Pennant Hills Road, and this was duly accepted and endorsed in July 2004 by the Australian Government.

Significant objection and vocal opposition to the study's recommendations led to the 2007 Review of the F3 to M7 Corridor Selection by the Hon Mahla Pearlman AO, former Chief Judge of the NSW Land and Environment Court.

The Pearlman Report of September 2007 recognised changes in land use and transport flows since the study, however these reinforced the selection of the preferred route. The report also confirmed that assumptions and data used in the study were valid, and overall recommended that:

2008 saw many hysterical stories and editorials in local newspapers complaining about hold-ups on the F3 due to serious accidents and bushfires.

Ever since the original SKM study, local groups and identities – supported by the Pearlman Report (as an option after the tunnel link construction), the NRMA and a Sydney Morning Herald editorial in January 2008 – are calling for the construction of another freeway link from the Central Coast to the M7, crossing the Hawkesbury River west of the existing F3 crossing.

STEP has always been aware of the danger to urban bushland posed by the old Lane Cove Valley freeway corridor. In recent years, we have continued to comment, preparing submissions for SKM's study and the Pearlman Report, as there are still vested interests lobbying for a surface route through the Lane Cove Valley and also because transport planning impacts on our present and future environment.

STEP is opposed to any F3 to Sydney Orbital link as will ultimately:

We insist and recommend that nothing should happen until there is an integrated transport plan for NSW, and by this we mean that there must be an end to the continuous patching up of an ailing public transport and freight transport system, that factors such as population growth and impending peak oil should be assessed and a strategy developed to take us through the next 100 years.