The Environmental Impact Statement on Hornsby Quarry was released in August with a closing date for submissions of 4 September 2015. STEP and the Geological Heritage Subcommittee of the NSW Division of the Geological Society of Australia have some concerns. 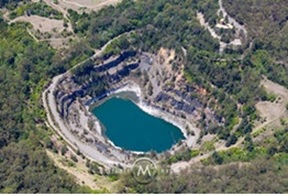 Prior to the state election in March, Matt Kean, the member for Hornsby, announced an agreement between Hornsby Council and the state and federal governments to share the financing of a plan to fill the void left by the Hornsby Quarry using spoil from the NorthConnex motorway tunnel. The filled void would then be converted to 40 ha of open space.

This seems to be an ideal solution. Hornsby and nearby suburbs have become a forest of apartment buildings. All these new residents need more recreational space close to public transport.

The filling process will take two to three years starting in early 2016. It will be a nightmare for the local community with up to 70 truck movements per hour entering and leaving the access point via Bridge Street, Monday to Friday (7 am to 6 pm) and Saturday (8 am to 1 pm). Mysteriously, the size of the open space has shrunk to 35 ha.

The EIS is the usual massive document – over 400 pages plus appendices. However there is a glaring omission that has been highlighted in the submission from the Geological Heritage Subcommittee of the NSW Division of the Geological Society of Australia (GSA) and STEP. This is consideration of the volcanic diatreme that has been excavated and exposed by the quarry.

As pointed out in the GSA submission:

… the significance of the geological phenomenon uniquely exposed in the quarry wall at the eastern end of the site has been overlooked and disregarded, leading to formulation of a plan for infilling the quarry which will largely obliterate this feature of state, national and arguably global significance.

The GSA argues that the benches cut into the eastern wall to a depth of 40 m must be retained clear of loose rock and spoil for ease of future access for researchers, students and the general public. The rocks and other materials in the diatreme provide information that is essential for an understanding of the creation of the Sydney Basin.

In summary the GSA states:

The existing report is inadequate, incorrect and appears to have been undertaken by consultants with limited (or perhaps no) geological knowledge. Furthermore, information readily available in the scientific literature has been ignored or misinterpreted.

The GSA strongly recommends that the geological aspects of the EIS should be revised with the assistance of a geoheritage specialist.

STEP is also concerned about the loss of more bushland. The bushland is acknowledged to be degraded but it contains tree species that are part of the habitat of the endangered Gang-gang Cockatoo. Some biodiversity offsets will be funded by the project but these usually involve the restoration of existing bushland that has been allowed to deteriorate, not the creation of new areas.