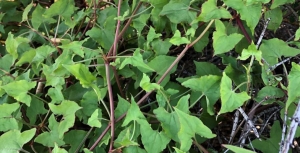 As reported in Regenavitus (newsletter of the Friends of Lane Cove NP), the botanical name of the pesky weed known as Turkey rhubarb has changed from Acetosa sagititta to Rumex sagitittus based on DNA research. Not another name change! Actually it has returned to its original name.

It has always been a mystery as to why this weed has been called Turkey rhubarb. Has it been mixed up with Rheum species that include the edible rhubarb?

According to Wikipedia the first known species is Rheum palmatum. It originated from western China, Tibet and Mongolia. During Islamic times, it was imported along the Silk Road, reaching Europe in the 14th century through the ports of Aleppo and Smyrna, where it became known as ‘Turkish rhubarb’ and also ‘Russian rhubarb’ and ‘Indian rhubarb’.

Its leaves are large, jagged and hand-shaped, growing in width to two feet. It can grow up to 2.5 m tall. So it is nothing like our ‘Turkey rhubarb’ except the flowers a vaguely similar. They didn’t have DNA analysis back in the 14th century. The flowers may be the answer?

It is primarily used in traditional medicine, and as an ornamental subject in the garden. The root of R. palmatum is known for its purported purging effects and suppressing fever. In ancient China, rhubarb root was taken to try to cure stomach ailments and as a ‘cathartic’ (an agent used to relieve constipation) and used as a poultice for ‘fevers and edema’ (swelling caused by fluid retention in the body tissues.

Do those large rhizomes that have to be dug up in order to remove our version of Turkey rhubarb also have medicinal qualities?