Late Spring in the Snowies 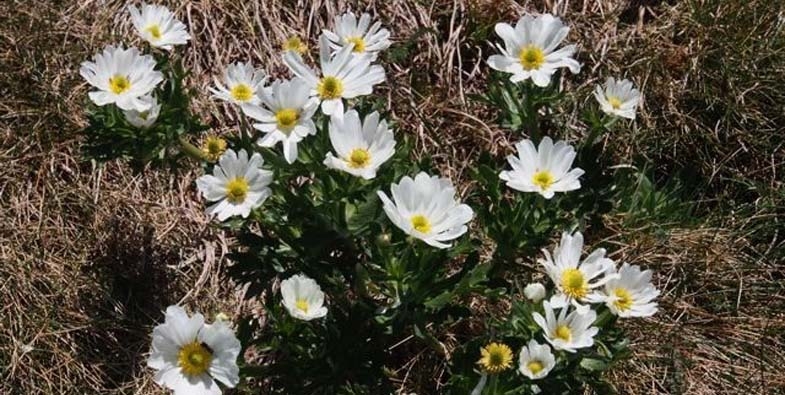 Two members of the STEP committee visited the Snowy Mountains in recent months. John Martyn saw plenty of flowers in late-spring but my experience in mid-January was that most of the flowering had finished. Traditionally January and February have been peak season for flowers. More evidence of climate change? John’s perspective on his visit follows.

The Snowy Mountains have a lot going for them in all seasons, though the visitor bias is strongly towards the winter ski season or to hiking and wildflowers in midsummer. But what about the transitional seasons?

A couple of years ago we went down there in mid-February to see and photograph Mueller’s snow gentians in flower: always late bloomers. And it sure was worth it! They are truly beautiful and of course endemic to the Australian Alps. But what about spring?

What happens after the snow gradually melts and retreats to just the major drifts? Well, if you go down there in late-October to December, you'll see, if you're lucky, some of the snowpatch flowers.

Classic, and among the most beautiful of these, are the alpine marsh marigolds Psychrophila introloba (formerly Caltha introloba) whose flowers can actually open beneath the snow. Their quite large five-petalled white flowers, tinged yellow and sometimes streaked with purple, nestle among the tufts of their bright-green leaves in the soggy grasses watered by the snowmelt. We saw and photographed them on the edges of a melting snowpatch on the slopes of Mt Stilwell – easily reached via a walking track from the turnaround at Charlotte Pass. 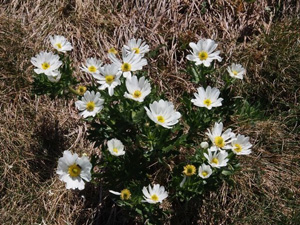 But the queen of the spring flowers is surely the anemone buttercup Ranunculus anemoneus. This is not strictly a snowpatch flower and we saw it scattered across a variety of grassy and heathy settings, and it's quite common near Kosciuszko Road along the last half kilometre to Charlotte Pass. As far as spotting them goes, however, it's fortunate that they flower before the main blooming season of the much more abundant Celmisia daisies, which display white flowers of similar size and colour.

The two flowers highlighted so far are both members of the buttercup family Ranunculaceae, and this family dominates alpine spring flowering. There are yellow buttercups of a number of species, scattered widely through the grasses and herbfields, or nestling in clumps. Snow buttercups Ranunculous niphophilus flourish and bloom actually in the meltwater of snowpatches. To us ex-Poms, the country above the tree line is strongly reminiscent of certain moorlands in Britain, especially Dartmoor with its granite tors, and to see buttercups everywhere in Kosciuszko reinforces this feeling. But let's tell you about another alpine gem and wonder.

It can be a bleak and challenging environment up there and we never seem to see a great variety of bird and animal life, so we were astonished to find crayfish claws and shells near the Mt Stilwell snowpatch at around 1950 m asl. The soggy turf and sphagnum with its trickling rivulets was peppered with holes, clearly made by these hardy creatures who must surely hibernate beneath the snow.

We never saw a live one in two visits in different seasons, but scouring the web turned up the likely candidate as a species of the genus Euastacus or spiny crayfish, of which there are 50, all endemic to SE Australia with 17 of them on the IUCN Red List.

The most probable one is Euastacus rieki as this species is recorded at the highest altitudes and is known to make burrows (not all of them do). However, its IUCN Red List entry quotes the highest recorded altitude as 1520 m and we found it at 1950 m – which is well worth exploring and investigating further.

All Euastacus species apparently require permanent water to survive, and this is traditionally available at Kosciuszko from snowmelt and from summer rainfall. Reductions in snowfall and progressively earlier snowmelts due to climate change must be considered a threat to these unique little animals.