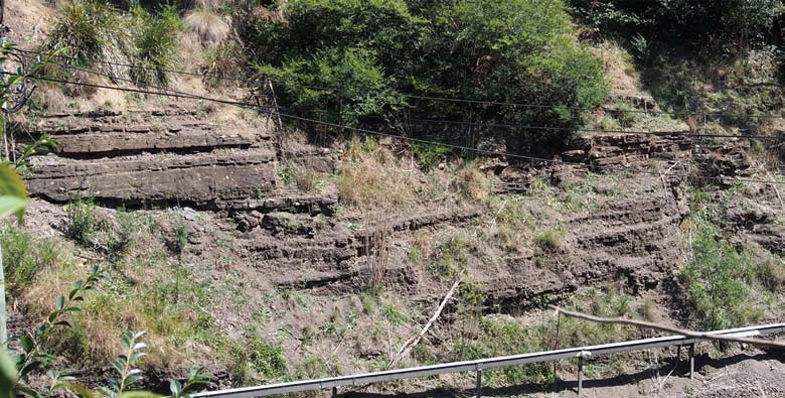 The geology of the Sydney Basin changes dramatically at the top of the Hawkesbury Sandstone, which is followed upwards ultimately by the thick, shale-dominated Wianamatta Group. It isn’t an abrupt change but usually a transition, via several metres of alternating sandstones and shales called the Mittagong Formation. The quartz-rich sandstones of the Mittagong resemble finer-grained versions of the Hawkesbury Sandstone and they are interleaved with dark grey to black shales, siltstones and laminites.

Originally named Passage Beds by JF Lovering in 1954, the current name was adopted from a selected type locality, the Gib (Mt Gibraltar) railway tunnel at Mittagong, where the formation is 15 m thick. Elsewhere it is almost invariably less than 10 m and can locally be absent altogether. Exploratory drilling for the Epping to Chatswood railway tunnel at Macquarie Park, for example, encountered only a 2 to 5 m thickness of it.

The variability is in part due to the nature of the dwindling flood plain and braided river system which deposited the Hawkesbury Sandstone. This vast system eventually lost its strength and became a plain of scattered sandbanks, swamps and lagoons. Clays settled in the latter but were periodically overwhelmed by sand brought by late floods leading to a sandstone/shale alternation of very variable thickness.

For such a thin unit the Mittagong Formation has a disproportionate effect on vegetation because it usually creates a broad bench at the top of the Hawkesbury Sandstone’s steep rocky dropoffs and cliff lines. This leads to the retention of soils and can even collect downwash from overlying Ashfield Shale if present. Such level surfaces can also attract deep weathering and laterite formation.

Like the shale lenses in the Hawkesbury, Mittagong Formation forms richer soils than the sandstone but stonier, more lateritic and less fertile than those of the overlying Ashfield Shale. These yellowish soils are typically classified as belonging to the Lucas Heights soil landscape, highlighting similarities in the bedrock between Mittagong Formation and Hawkesbury Sandstone with its shale lenses in the Lucas Heights area.

Plant communities hosted by Mittagong Formation are diverse and usually gradational to those of adjoining shale or sandstone, often falling within the broad envelope of Shale Sandstone Transition Forest with either a sandstone bias or a shale leaning depending on setting. In other sites the communities may be more tightly defined in terms such as Sydney Turpentine Ironbark Forest, Turpentine Ironbark Forest, or where strongly lateritised, Duffys Forest. They tend to have one thing in common, they are mostly legally defined as threatened, mainly because they survive in narrow, disjointed enclaves isolated by land clearing.

Is it Possible to View the Mittagong Formation?

Not as easily as you might think, and only in artificial cuttings – natural exposures are virtually unknown! 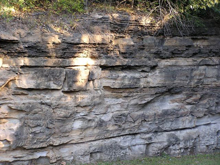 You can look at its type locality at the south-west end of the Gib Tunnel at Mittagong but only by telephoto lens through a security fence (see photo at the top of this page). It's also visible in cuttings along the M31 nearby, but at 110 km/h it's a case of ‘don't blink or you'll miss it’. The best locality is probably the road cutting of the Picton railway overbridge (see photo) though you'll have to park down the road and walk back in if you want to see it hands on.

In our own local area there are a number of rather poor and vulnerable artificial exposures, like the M2 cutting under the Barclay Road over-bridge at North Rocks. But this is currently being plastered in concrete by the North Connex guys and will soon largely disappear. The embankment of the Abbott Road eastbound feed-in lane to the M2 is good too but you can't stop there, nor can you for the south-west embankment of the M2 north-west of the Lane Cove Road interchange at Macquarie Park.

As for natural outcrops, when you stroll around in bushland on the flat ground above Hawkesbury Sandstone dropoffs you may see abundant shards of lateritised shale and siltstone in the soil, but unless you stumble on an erosion gully or creek line you'll be lucky to see anything more.

Sheldon Forest is a pretty good start. Wander down past the scout hall to the sweeping apron of tall Blackbutt forest and you'll be descending from Ashfield Shale onto Mittagong Formation. As the track descends further towards the Hawkesbury Sandstone dropoff there is a marked increase in Turpentines, Sydney Red Gums and many shrubs of sandstone affinity such as banksias. But you don't have to return very far back uphill before shale species like the pea-flowered groundcover Tick Trefoils Desmodium rhytidophyllum and D. varians reappear.

At roughly 3.5 ha, this is probably the largest area of Mittagong Formation bushland in the Lane Cove catchment. It's primarily Blackbutt forest very like lower Sheldon but several other tree species are present, notably Sydney Red Gum, Red Bloodwood and Red Mahogany, and both White and Narrow-leaved Stringybarks are present though these are rare, scattered and sometimes in poor condition. The shrub flora is rich and includes the critically endangered Julian's Hibbertia, H. spanantha. The Sydney region has a greater diversity of hibbertias than any other similar-sized region of Australia and H. spanantha will very likely not be the last new species to be discovered.

This sits above the sandstone on the opposite side of the Lane Cove Valley across from South Turramurra. It's a small area with a very diverse tree community, including Sydney Red Gum, Red Bloodwood, Narrow-leaved Stringybark, Sydney Peppermint, Blackbutt, Turpentine and Christmas Bush. The shrub Laurel Geebung Persoonia laurina, uncommon in the Lane Cove catchment, is quite common here.

Located at the junction of Showground Road and Gilbert Road, this is a classic locality to walk from shale cap down across the Mittagong Formation and see key plant species. The lower parts of the reserve are Hawkesbury Sandstone but the crest of the rise bordering Gilbert Road carries shale and transitional flora, notably with trees like Grey Gum, White and Thin-leaved Stringybarks, Grey, Broad-leaved and Narrow-leaved Ironbarks, Red Mahoganies and Forest Red Gums. As you descend towards the sandstone, Red Bloodwoods and Black She-oaks assert their presence.

A stones throw north of Galston, this popular area of grassy park, lakes and bushland straddles the sandstone–shale transition zone, though how much is Mittagong Formation and how much Ashfield Shale is hard to deduce on the ground. The bushland fringe along Arcadia Road is certainly on shale and you can find good specimens of White Stringybark, White Mahogany and Grey Ironbark. This changes north-eastwards, and if you enter the park from Carrs Road you will first see the odd White Mahogany and Grey ironbark but you will immediately enter an area of pure Turpentine forest, almost certainly hosted by Mittagong Formation soils.

This is the third in a series of articles by John Martyn on Sydney’s geology.