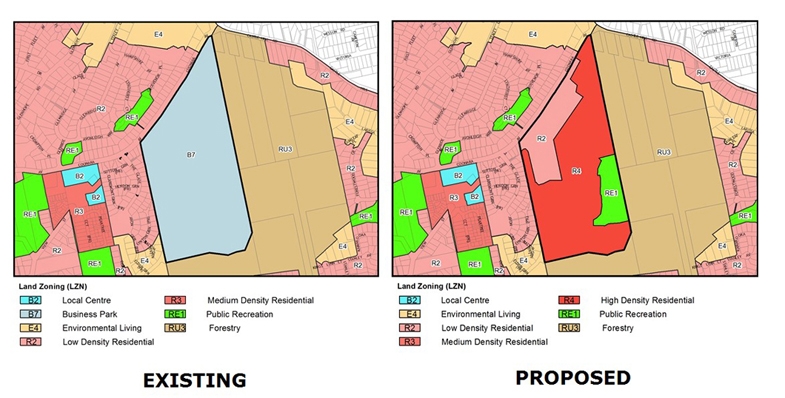 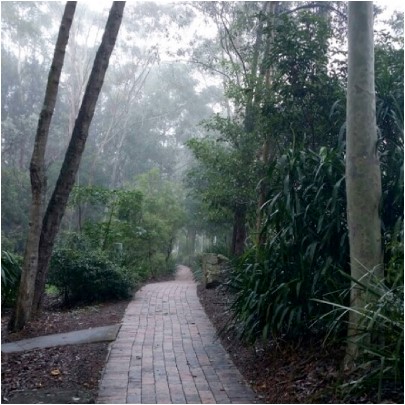 Back in the 1980s IBM built an office complex at 55 Coonara Road, West Pennant Hills. The building design won several architecture awards. The office environment is idyllic. The buildings are surrounded by an extensive tree canopy including Blue Gum High Forest that is now 25 to 30 years old. IBM worked with the National Trust to establish a bush regeneration plan and 40,000 native plants were planted.

IBM sold the land to property developer Mirvac in August 2010. The buildings were renovated in 2011 and IBM is still a tenant but Mirvac has set out to develop the site to take advantage of the site’s location near the Cherrybrook Metro development precinct.

The total site covers about 28 hectares. It is next to Cumberland State Forest. The IBM buildings are on the northern western part of the site. The southern part contains bushland that is at least 70 years old, some having not ever been cleared but may have been logged in the early days as happened in most of Sydney’s original forests. A large part of this area contains critically endangered Blue Gum High Forest or endangered Sydney Turpentine Ironbark Forest. The forest is Powerful Owl habitat plus there is known habitat for the threatened Dural land snail and two vulnerable microbat species. There hasn’t been a full ecological assessment of the whole site.

Mirvac originally proposed to build 1269 dwellings in the area of the old IBM buildings but negotiations with the Hills Shire Council cut this back to 600 dwellings. The whole site including the southern forest is currently zoned as B7, business park. The proposal was considered by council in July. They decided to submit the plan to the Department of Planning for a Gateway Determination of an amendment to the zoning of the site.

Council proposed that the redevelopment area be zoned as R2 medium density, an existing cleared area be RE1 but the remainder, the high quality bushland area, be zoned as R4 high density residential. Importantly, there was going to be no environmental protection for this area containing a significant area of critically endangered forest.

Once it became known all the local community groups formed a coalition called Forest in Danger to oppose the prospect of this magnificent bushland being covered in high rise apartments. In fact the immediate medium density development will also destroy high quality vegetation. There are several other reasons for rejecting the plans that are listed below.

The basic problem is that the reports from Mirvac and council focused on the development site. There was very little information on the rest of the site and therefore no consideration of fundamental issues with the potential loss of biodiversity.

Not only that, the Department of Planning provided a rezoning review briefing report on the site. It noted that A Plan for Growing Sydney does not identify this land for residential purposes and there is no alternative strategy endorsed by council regarding the site’s future use. So, on top of the issues with loss of the forest there is no justification for the rezoning consistent with a strategic plan for additional housing, employment, retail or other business development and transport infrastructure. Traffic on nearby Castle Hill Road is already severely congested. The claims of proximity to Cherrybrook Metro Station are questionable as the walk is more than the desirable criterion of 800 m from the northern part of the site but more like 2 km from the southern part up a steep hill.


The R4 zoning is proposed for the southern area even though no proper assessment has been made of bushfire management, stormwater and flood prone land on top of the loss of biodiversity. Once the zoning is changed the whole forest would be in danger of destruction.

Another community forum was held on 18 November in Cherrybrook. Over 250 people attended and heard a detailed description of the flawed process undertaken so far and of what would be lost if the current zoning were to go ahead. The rezoning plan is opposed by several new councillors on council including the mayor and nearby Hornsby Council.

Summary of Arguments against the Proposal

STEP is strongly opposed to any loss of Blue Gum High Forest (critically endangered) and Sydney Turpentine Ironbark Forest (endangered) no matter how small, as these tiny incremental losses will inevitably lead to their extinction in the long term. This applies to the potential loss in the medium density development area as well as the large areas of these forests in the southern forested areas where the R4 zoning is proposed.

The proposed asset protection zone around the development area impacts 0.18 ha of Blue Gum High Forest up to 71 years old, and 0.5 ha of Blue Gum High Forest and Sydney Turpentine Ironbark Forest natural remnant bushland. The NSW Rural Fire Service discourages development in bush fire affected areas that would incur significant environmental costs. There are significant environmental constraints here which are not overcome in this proposal.

The impact on Powerful Owl residents would be substantial. These owls need not just peaceful nesting trees and roosting habitat but large areas of trees in which to hunt. Substantial numbers of trees 25 to 30 years old would be cleared for this development and hence reduce hunting opportunities and the probability of owl survival.

Fragmentation of the Forests

The Cumberland State Forest and 55 Coonara Avenue currently form an area of over 60 ha of bushland from the ridge, down to gully habitat. The development and asset protection zone reduce the area of trees and forests and the asset protection zone increases the separation of this site from the Cumberland State Forest. This fragmentation reduces the value of this comparatively large area of remaining Sydney Turpentine Ironbark Forest.

The bulk of this land should at the very least be rezoned to E2 for environmental conservation. Ideally the site should be added to the adjacent Cumberland State Forest and conserved in perpetuity.

For the latest information on the campaign against the development and more detail on issues with the proposal go to www.forestindanger.org.au.

Email or write to: