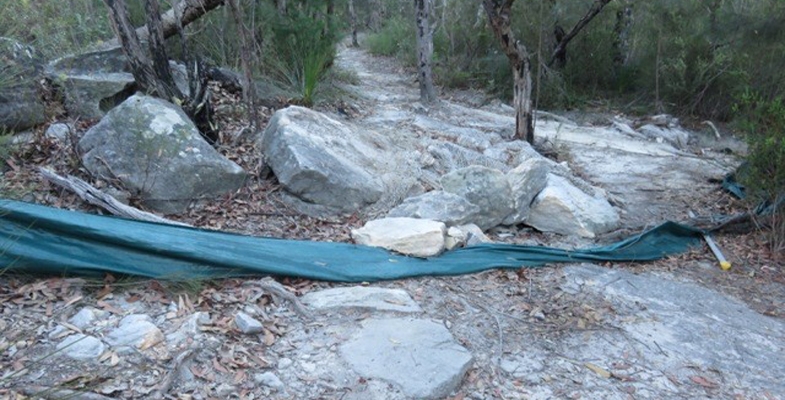 Ku-ring-gai Council’s decision to close the Warrimoo Downhill Mountain Bike Trail was taken in July 2016 (see STEP Matters 188). We all thought that this decision would be respected by the downhill bike riders given the strong reasons for its closure. We were wrong! This is not the only area that is being abused by these arrogant individuals. We recently discovered another track in Garigal National Park and have heard of many others. The details below explain why these cowboys must be stopped. 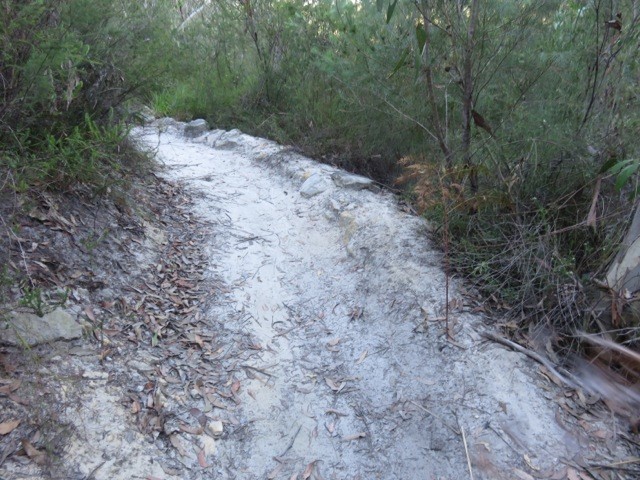 The track below Warrimoo Oval must have taken a lot of effort by several people to construct. It contains multiple jumps, ramps and curves as shown above and right. It could only be used by expert thrill-seeking riders. The independent report commissioned by council stated that the average decline is over 23% whereas the standard used for downhill trails is that they should be no more than 10%. Hence it is risky.

The major reason for closure is the ecological damage caused by the track construction and its continued use. The area contains an endangered ecological community called Coastal Upland Swamp and is also habitat for several threatened native birds, plants and animals. A STEP committee member who is a volunteer in a council-run Eastern Pygmy Possum monitoring project has observed threatened Eastern Pygmy Possums and Rosenberg’s Goanna. Under NSW and federal environmental laws, council is required to protect and conserve this ecological community and the native animals and birds that live within it.

The construction involved bush rock removal, clearing of native vegetation, removal of dead trees and wood, infection of native plants by Phytophthora cinnamomi and changes to landscape hydrology, which is adversely affecting the Coastal Upland Swamp and individual threatened species.

During a visit to the area just after the recent school holidays it was discovered that barriers and signs on the track installed by council had been shoved aside. The tyre marks along the track indicated that riders were still using the track. In 2016, council installed signs warning about video surveillance and explaining the reason for closure. These are being ignored.

This track and other downhill tracks are shown on some mountain biking websites encouraging this illegal use.

Following discussions with the local mountain bike community, council is working on options to reopen part of the trail that is south of the Coastal Upland Swamp. This involves completing an ecological feasibility study and consulting with an experienced mountain bike trail builder to see if suitable track modifications can be made with satisfactory ecological and safety outcomes. Given the steepness of the site and disturbance of the bushland reopening of the track is not guaranteed. The study will be completed by mid-2018. 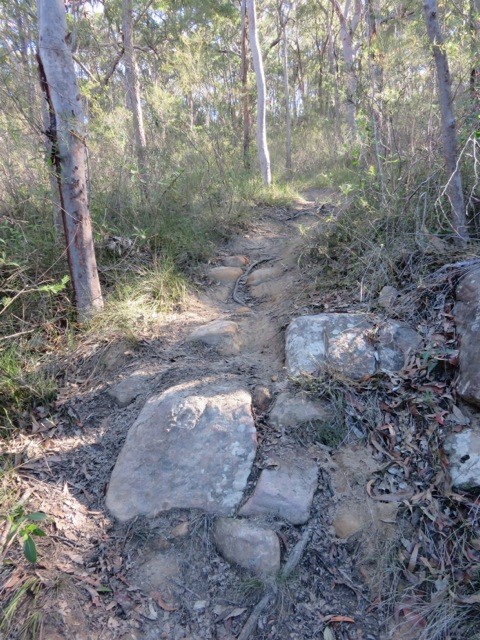 We have also discovered a new mountain bike track that has been carved through high quality bushland below Cambourne Avenue in St Ives down to Middle Harbour Creek. It takes a straight line down the hill while the legal management trail zigzags across the slope.

This is another area where threatened species have been found, namely the New Holland Mouse and also the Eastern Pygmy Possum.

Again a lot of work has gone into constructing ramps and jumps – see photo.

We encountered two riders who didn’t care that they were breaking the law and possibly causing untold damage to threatened fauna as well as their habitat, the bushland with large numbers of species providing food for these animals.

The law is that mountain bikes are allowed in national parks and council land on fire trails, roads and management trails and signage is provided to confirm that cycling is permitted.

These riders think their needs are too important for them to have to wait for the proper process of downhill track construction. This involves surveying plant and animal species that will be affected by bike riding. A route needs to be chosen that will cause minimal damage to the bushland and then a track is built that will be safe, resilient to weather and usage pressures. This process takes time and is expensive.

STEP is not happy about the two tracks that were built in the Frenchs Forest part of Garigal National Park, the Gahnia and Serrata tracks, because they traverse high quality bushland and their usage is likely to lead to introduction of pathogens and weeds and changes in hydrology. However the quality of construction means that their usage over the past two years has not caused any obvious damage so far. We understand that these two tracks cost over
$1 million to build.

Certainly there is a growing demand for mountain biking facilities and we should be encouraging participation in active outdoor sport like this but there are many trails available that can be used legally.

There is also a strong demand for the adrenalin rush of steep downhill rides but this must not be at the expense of damaging quality bushland that is already under attack from urban development and climate change (drought, bushfire). It is not as if the riders could possibly appreciate the bushland as they speed down a hill paying close attention to the next obstacle on the track.

NPWS needs the resources to prevent the construction of these illegal tracks.

What can we do?

The best we can do is alert the authorities, national parks rangers and council staff about any track we see when out walking in the bush. Also alert your local MP about your concerns and the need for more policing of illegal activities.