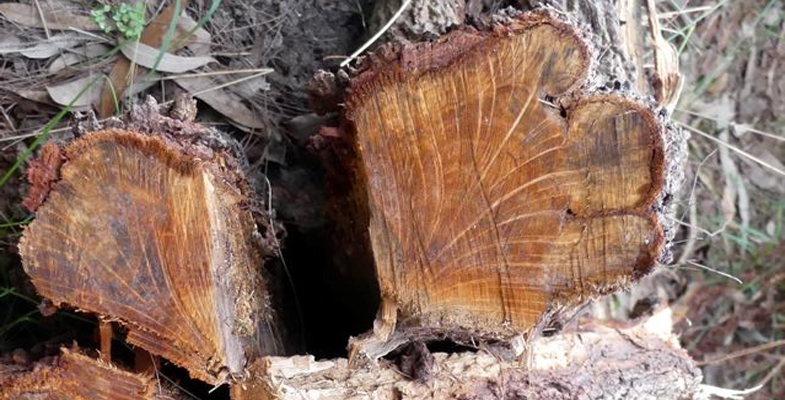 The names of many of our native trees were taken from perceived resemblances of their timbers to those of traditional Northern Hemisphere species like oak, and tropical hardwoods such as mahogany, something for which we can no doubt thank early settlers. On many occasions the common names mean little botanically but reflect species from unrelated plant families or with no close relatives among Australian flora. Let's take a classic example.

Red Cedar Toona ciliata is named after North American Western Red Cedar, or more correctly ‘Redcedar’ Thuja plicata of innumerable window frames and architraves. Our native version isn't even a conifer let alone a member of family Cupressaceae. T. ciliata, surprisingly, is actually in the Mahogany family Meliaceae and of course it's a hardwood.

From here we could move the article on to the various trees Australians call mahogany, with many examples, but what about our various ‘oaks’ such as Tasmanian ‘Tassie’ Oak, Silky Oak, Northern Silky Oak and the various ‘sheoaks’ ‘she oaks’ and ‘bull oaks’.

The term ‘Tassie oak’ generally embraces three species of Eucalyptus – E. regnans, E. obliqua and E. delegatensis all of which have hard, light coloured timbers in shades within oak's range, though they rarely show the classic feature of true Northern Hemisphere oak of the genus Quercus – that of medullary rays.

If you are unsure what a medullary ray is have a look at any oak furniture you may have. Or failing that, next time you are on a bushwalk and a Black Sheoak or Forest Oak has been blown down across a trail (a common event) and sawn up, look closely at the cut ends. The picture below is of just such a tree and you can clearly see striking, curvilinear radial streaks that cut across the concentric growth ring pattern. For the living tree these carried out a function of conducting water across the grain, but they also mature to an attractive and sought after feature of polished timber in cabinet making and wood turning.

As well as in members of family Casuarinaceae, medullary rays are typically also found in Proteaceae species, notably of course Silky Oak Grevillea robusta and Northern Silky Oak Cardwellia sublimis. We are perhaps lucky that the numerous beautiful plants of this family do not generally grow to timber size except to provide an occasional rare source for specialist ornate inlays and veneers.

You may own items of true oak furniture, or you may visit a pub, restaurant or antique shop or watch Antiques Roadshow, featuring traditional-style oak furniture, and see the rays expressed as graceful, wavy, lenticular patterns. But our very own silky oaks and sheoaks show these beautifully and have also been widely used historically, turning up in such settings as traditional church pews and well-crafted furniture and inlays. And although darker than real oak, you'll spot them immediately from their medullary flecks and patterns.

Alternative insight into the naming of tree species by John Martyn