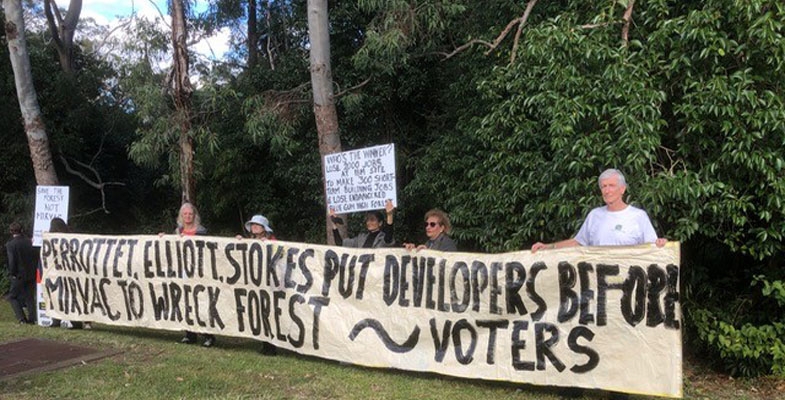 An article in the last issue of STEP Matters explained the bad news that the rezoning of the IBM site was on the list of projects being ‘fast tracked’ by the NSW government. The approval applies to the rezoning required from that of a business park to enable Mirvac to proceed with the construction of 600 apartments.

We did explain that there are some modifications that appeared to address some of the concerns held by local community groups. However, it has since been discovered that there are conditions that may put these improvements in doubt.

The NSW government and Mirvac promised the community that the critically endangered forest on the Mirvac site would be incorporated into the Cumberland State Forest. Residents have found out that Mirvac intends to dedicate the forest to the Minister for Planning only just prior to the issue of the occupation certificate for the final stage of the proposed development. It will be at least five years before this stage will be reached. It seems some hard-nosed bargaining took place.

According to the documents there will be no funding provided by Mirvac for the upkeep of the forest. With no commitment how can it be looked after while it is right next to a construction site?

Mirvac has set up a promotional website that states that:

Mirvac understands the important role the remnant Blue Gum High Forest and Sydney Turpentine Ironbark Forest has in providing valuable habitat for local native flora and fauna and we are committed to its protection. Approximately 9 hectares will be committed to the State Government to become an extension to the Cumberland State Forest.

The original plans that were knocked back by Hills Council included a voluntary planning agreement. Mirvac was going to fund the construction of some public recreation space, but that has disappeared from the planning documents. It is estimated that a whopping $46 million worth of local infrastructure has been given up by the NSW government in their haste to push through this development that has been condemned by the local community. Council will have to find the funds to provide the infrastructure needs for an estimated additional 1,200 residents.

The local community groups, Forest in Danger and West Pennant Hills Valley Progress Association will be keeping a close eye on the next stage of approvals that will need to be assessed by council.