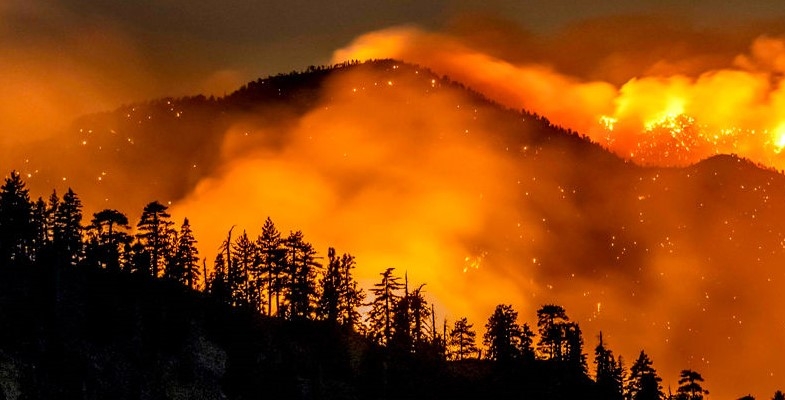 Now our bushfire season has officially started it’s interesting to look at the devastating fires in the western US: still burning, their season apparently with some weeks to go! I got interested through visits to relatives in California and British Columbia, including in the latter case in 2014 when BC had many interior blazes and Vancouver was smoke-hazy, however this article is tempered by my frustrating lack of first-hand knowledge and draws heavily on on-line info.

Although North America's fire-prone latitudes are roughly a mirror image of our own, their fire weather patterns differ in some respects, in California’s case being driven by the late summer–autumn ‘Santa Ana’ winds, essentially high pressure driven easterlies – very strong and very dry, accelerating down from the interior mountain ranges. You may have seen the satellite images of smoke plumes hundreds of kilometres long streaming westwards over the Pacific. Like here, their blazes may be started by lightning, clashing power lines and careless or criminal acts though I haven’t chased up statistics. Quite terrifying dry lightning storms have been a feature of some of the recent outbreaks.

What are the vegetation characteristics of the often mountainous western terranes and how do they resemble or differ from ours in surviving, adapting and recovering from fire? Well there’s an abundance of information available on-line with a lot of names and terms new to me, and it’s crazy to go for too much detail, but let’s look at examples of the main plants, communities and their fire issues.

Chapparal is the summer-dry shrubland and heathland interspersed with grassland in southern California and Mexico that most resembles Mediterranean-type plant communities in Australia. Like shrublands of south-west WA and the fynbos of South Africa it is regarded as a biodiversity hotspot. It is fire prone and its low structure provides little resistance to winds like Santa Ana, therefore fire can engulf it extremely swiftly. But not surprisingly, its tough shrubs like Manzanita sprout and regenerate from woody rootstocks – some pictures on the web of green sprouts rising from nests or corrals of burnt sticks are remarkably familiar. Also many seeds of its common species are fire dependant. And like Australia, seeds of plants like Californian fire poppy germinate to create prolific post-fire wildflower displays.

Coniferous forests with many different tree species have gone up in smoke and I was interested to read what their powers of resistance and recovery might be. Do they resprout or merely re-seed?

Ponderosa pine, Pinus ponderosa is the most widely distributed pine species in North America and a dominant and key one in western forests. It has a distinctive, thick, reddish brown, platy ‘jigsaw puzzle’ bark and been has recorded up to more than 80 m tall. The bark is reasonably fire resistant but its issues with fire have many other interesting aspects. Park-like old growth forests of tall, widely-spaced trees familiar to early settlers and Native Americans, and governed by natural fire regimes and native burning, have been gradually replaced by massive regrowth of multiple, closely-spaced young trees, creating tinder box conditions in hot, dry, windy weather. Abundant saplings can cause a ladder fuel effect with ground fires flaming up and consuming canopies, and thereafter whole forests. The ponderosa fire issue is complex but well researched and if interested I encourage you to read this article.

We are familiar with seed cones that release seeds by fire, but several other species of conifer have this characteristic, where cones are tightly bound and seeds protected by resin only to burst open and release their seeds. Lodgepole pine is one such species and is notably quick to germinate after fire (see Fig 1).

You’ll be aware of Californian redwoods Sequoia sempervirens especially if you’ve visited memorable Muir Wood near San Francisco or any of the reserves of these giant trees growing within a 750 km long near-coastal zone. Yes, they can and do burn but are quite fire resistant having tough, thick bark and very high crown bases, and they also resprout epicormically quite readily. Often their forests have open floors and this is encouraged in a general movement towards hazard reduction burning of understory where possible. (The Redwood Trees will be Just Fine) 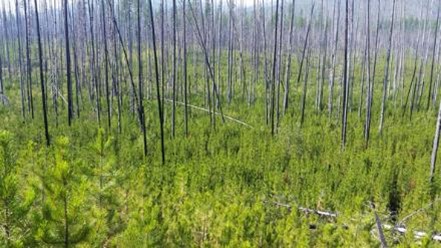 Some more notes and thoughts

Bark beetle infestations
If you look at some of the pictures of infested dying coniferous forests you’ll be stunned and saddened – whole forests wiped out by one or more of the 600 or so species of bark beetle that burrow into the cambium and interrupt the water and nutrient flow. Such dead and dying forests are obviously particularly fire prone.

Snags
This is a common North American term for standing dead trees, from a variety of causes like fire, lightning, beetle attack, disease or old age. But there is a positive note as they are regarded as key wildlife habitats providing homes, nesting sites and food for wildlife. There are whole forests of snags from recent fires, but there are stories and instances of birds such as woodpeckers going in and feasting on dead and dying grubs and beetles, and the dead and broken trees provide many hollows and nesting sites.

Resprouting
Trees can recover by sprouting from lignotubers. But we are familiar with the abundant fuzzy post-fire epicormic regrowth on eucalypts and many other Australian species, and apart from redwoods I didn’t come up with clear examples from the mountain forests of the US west. But let’s not forget that not all eucalypts do this as a matter of course.

Fig 2 was taken in Thredbo Valley in 2010 and shows a dead forest of alpine ash, Eucalyptus delegatensis, floored by a dark green mini-forest of saplings from the seed bed. Many western US forests pictured on the web show a strongly similar recovery pattern (see Fig 1). However, others may be laid open to invasive species or gradual conversion to shrubland or grassland. 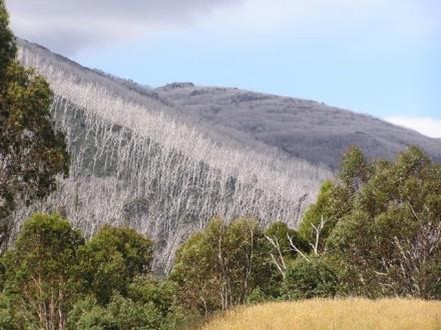 Donald Trump famously said that poor forest management not climate change had caused the current Californian and Oregon fires. The statement was made in the wrong context from a highly biased viewpoint but surprisingly there’s an element of truth lurking in it. It’s generally regarded that the loss over one and a half centuries of widely spaced, park-like old growth forest and its replacement with dense regrowth has intensified the fire risk, and that human influence is a prime cause. There seems to be a general move favouring closer fire management and hazard reduction burning of ground vegetation and understory that mirrors our own challenging situation, but I’m drifting out of my depth here and I’ll finish on that note. Finally, this link is a good concise read.

John Martyn has been pondering for some time how forests in the western US resist, react and recover from fire. Do epicormic growth and root sprouting play a role or is it mainly seed based? He decided to do some research and here are his preliminary findings.