Tree Disputes are much the same now as 65 Years Ago 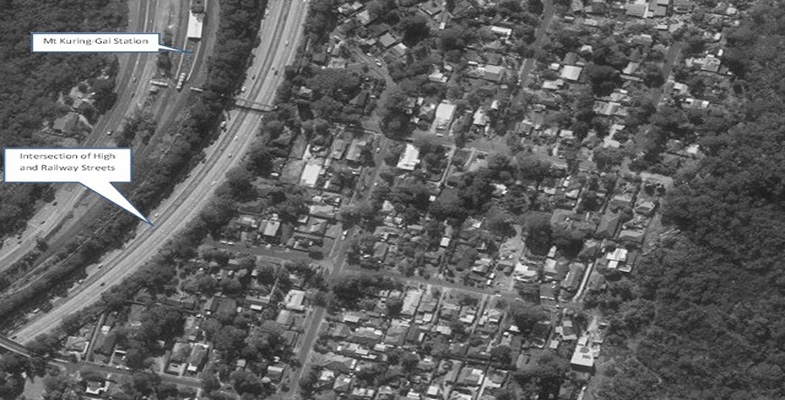 In the last newsletter we highlighted the loss of tree canopy in Hornsby Shire and illustrated the abrupt decrease in tree canopy from Ku-ring-gai Chase National Park to the urban area along Harwood Avenue, Mt Kuring-gai.

An article on page 1 of the Sydney Morning Herald on 24 December 1952 shows emotions ran as high then as they do now.

Mr John Richardson, 76, a well-known Mt Kuring-gai resident, was charged at Hornsby Petty Sessions yesterday with assaulting Mr AJ Cresswell, the Kuring-gai shire engineer, by threatening him with a gun.

He was remanded until January 9 on £20 bail.

Mr Richardson, a retired engineer, lives with his family in a large old house, the grounds of which are a show place in the district.

The disputed trees are just outside his property on the corner of High Street and Railway Street, and frame a vista across Cowan Creek Valley.

About nine months ago, after Hornsby council employees had sent bulldozers to clear land further south, local residents protested at the destruction of trees.

Once, ratepayers’ wives stood in front of some to prevent their destruction.

An agreement was eventually reached with the council by which selected trees were spared.

There is a sharp division within the community between the ‘pro-tree’ and ‘anti-tree’ elements.

The ‘pro-tree’ element contends that only by sharp vigilance have they prevented Mt Kuring-gai from becoming denuded.

‘A lot of new people are coming to this neighbourhood who want to cut down everything. They are vandals.

‘The trees are being removed to-day give us shelter. They protect us from southerly gales.’

After Mr Richardson had been released on bail, the police offered to drive him home.

Mr Richardson said he preferred to go by rail.

But at Hornsby Station he got on the wrong train – a non-stop train to Gosford. He had to spend several hours there before catching a train back.

This news item was followed by a letter from the Shire President on page 2 of the Herald on Saturday 27 December 1952.

Sir, The report in Wednesday’s ‘Herald’, headed Dispute Over Trees, did not present the case fairly from Hornsby Council’s point of view.

Some time ago council provided a street light at the intersection of High Street and Railway Street, Mt Kuring-gai, and later undertook some clearing of the roads, having regard to the residential development which has taken place in that locality.

Complaints were received from many of the residents, who in some cases are young folk, that the scrub and undergrowth at this point presented a hazard at night, first in that it prevented the street light from efficiently illuminating the intersection referred to, and secondly, provided a harbourage for any undesirables.

As president of the shire, I instructed the Electrical Engineer Manager to personally supervise the tidying up of this corner and to remove only any under scrub and rubbish which helped to obscure the light. The statement attributed to me that I said ‘the trees would be spared’ is not in accordance with fact. My statement was that only those trees or undergrowth which it was found absolutely necessary were to be taken out. No trees whatever of any dimension nor of any beauty were interfered with.

Hornsby Council over the years has been most tree conscious and has many miles of roads and streets, and also parks within its boundaries planted with trees which are now reaching maturity, and during the current year carried out tree planting for a total length of over one mile. It has always been council’s policy to retain trees to the fullest extent even when road construction works and the extension of electric light and telephone services are proceeding, and in cases where removal of some trees has been absolutely essential others have been planted in close proximity to replace them.

The fight was all in vain as shown in the aerial photos below and above. 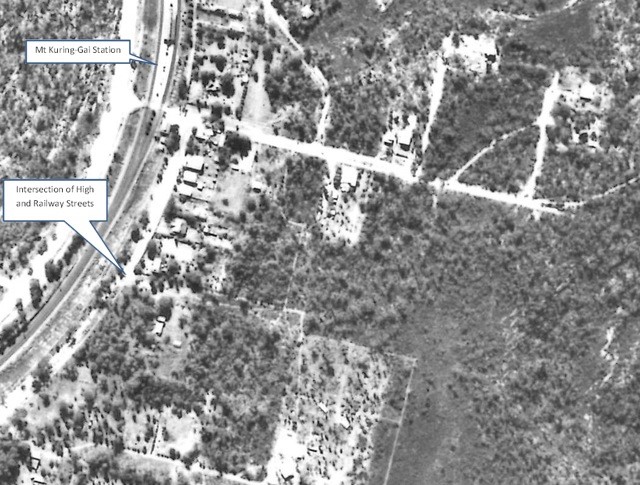 Mt Kuring-Gai 11 years before this dispute (1941). Many trees are present at this intersection and across the eastern side of Mt Kuring-gai. The individual tree canopies are small and presumably indigenous trees such as Eucalyptus haemastoma (Scribbly Gum) various Stringybarks and Corymbia gummifera (Red Bloodwood). 4138 Map 1310 156-5/417 Broken Bay Run 12 1941.

The photo at the top of the page illustrates how the fight to save these trees was all in vain as during the 1970s this intersection was removed for construction of the M1. In 2017 there appears to be generally fewer trees but with larger canopies than in 1941. Aerial view from SIX Maps, accessed 2017.

Robin Buchanan wrote this item. She must have a very good filing system to be able to find the newspaper cuttings!